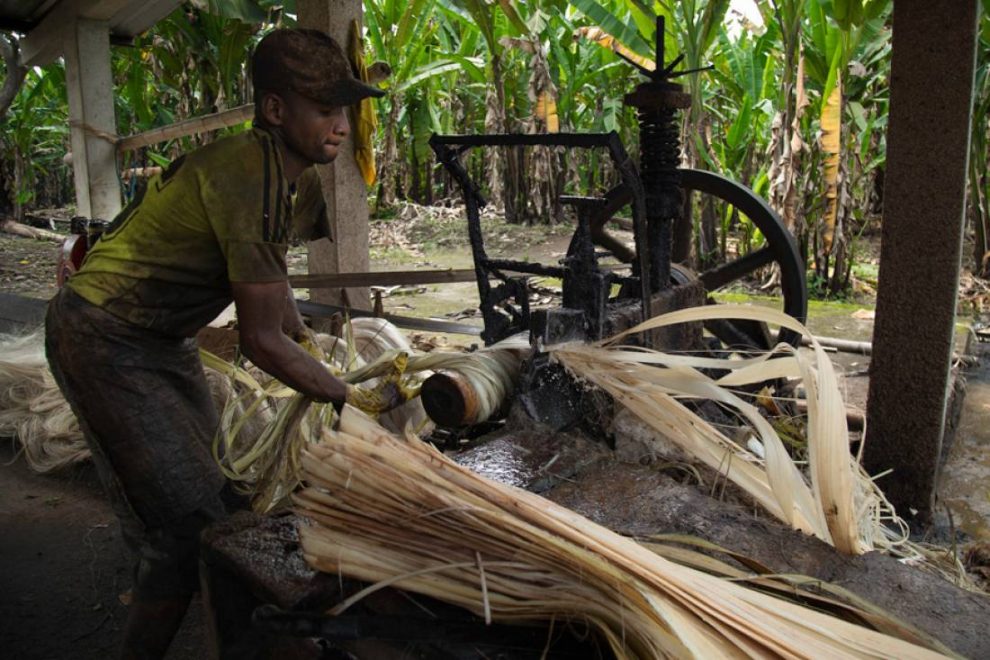 BOGOTA: Susana Quinonez was born and raised on an abaca tree plantation along Ecuador’s western coast where back-breaking work and extreme poverty were what passed for a normal childhood.

For 16 years, Afro-Ecuadorian Quinonez labored on the estate, stripping abaca fibre from the stalks of banana trees, removing the pulp then washing and drying the yarn for export to the United States and Europe to use in paper, cars, and teabags.

She recalled rising at dawn to cook by candelight on a wood-fired stove. Dodging snakes, Quinonez would navigate narrow dirt paths carved between endless rows of trees, to work 12-hour shifts before returning to her bare, cramped concrete hut.

The cost of equipment, be it machetes or gloves, as well as medicine and healthcare, was deducted from their pay, she said, with cut fingers and legs a common hazard and wages barely enough to cover the cost of food.

“We were enslaved there. We were mistreated,” 60-year-old Quinonez, who was aged eight when she began working on the estate in the province of Santo Domingo de los Tsachilas, told the Thomson Reuters Foundation.

Quinonez now wants that wrong righted and her testimony – along with that of 122 other ex-laborers from the Japanese-owned Furukawa Plantaciones C.A. company – went before a local judge last month who ruled their workers’ rights had been violated.

The company, that is still operating about 30 plantations covering more than 2,300 hectares in three provinces in Ecuador, did not respond to requests for comment.

But Marcelo Almeida, ex-head of Furukawa in Ecuador, told local investigative media outlet Revista Plan V in 2019 that he was unaware of any violations on the plantation and workers and employees were up-to-date with social benefits and labor rights.

The case, however, is being hailed as a legal milestone in the South American country where hundreds of Afro-Ecuadorian families lived in slave-like conditions for more than 50 years, according to Ecuador’s Ombudsman Freddy Carrion.

For in an oral ruling, the judge said that the workers had suffered racial discrimination and were victims of servitude – a form of modern-day slavery – opening the way to compensation, said the plaintiffs’ lawyers.

“This is the first of its kind case that recognizes modern-day slavery involving agriculture in Ecuador,” said Alejandra Zambrano, one of the workers’ lawyers.

Zambrano, who visited the plantation with the judge presiding over the case in July 2020, said she saw dire living conditions with workers’ home having no toilets, children working, and dangers in the workplace.

Ecuador is the world’s second largest exporter of the durable abaca fibre, mainly exported to Europe, Japan and the United States, and is used in a variety of products, including rope, car interiors, and currency notes.

Exports of the fibre bring Ecuador on average about $17 million a year, according to central bank data.

Yet the workers have little to show for it and are seeking redress for the labor and the pain, as well as deeds to land they say has been theirs down the generations.

The judge ordered Furukawa to compensate laborers and for the company and several government ministries to issue an apology in local media and on their websites, listing all 123 workers by name, Zambrano said.

The full terms and amount due will only be known once the judge issues a written ruling, expected within weeks, Zambrano said, adding that the case would likely move to a higher court.

Lawyers for the laborers said many lived and worked in dire conditions without even the most basic protective equipment.

According to testimonials, workers often cut themselves and some even lost limbs in machine accidents.

Ecuador’s labor ministry said in a 2019 report that it had found “child labor”, “inhumane working conditions”, “labor risks” and “work accidents” following inspections of the site.

Ecuador’s vice minister of labor, Sharian Moreno, said she could not comment on the judge’s ruling as the case was ongoing.

She confirmed that the labor ministry carried out inspections from 2017 to 2020, handing down fines totaling more than $150,000, including for child labor.

Ecuador’s ombudsman’s office also raised the alarm about human rights violations in reports in 2018 and 2019 and said the court ruling may prove a long-awaited game changer.

“Both the state of Ecuador and the company are responsible, and are compelled, to provide reparations for the victims.”

The judge’s decision is not definitive, Carrion said, voicing hope that a provincial court will uphold it.

But Almeida, formerly of Furukawa, said the company, founded in Ecuador in 1963 with some 200 employees, rented out land to contract workers.

He said it was the renters, and not the company, who were responsible for the upkeep of housing, while the company had improved its workers’ living conditions and repaired homes in parts of the plantation.

Repeated requests to the company for more comment went unanswered.

Mayra Valdez, a plaintiff born on the Furukawa estate who started work aged eight cooking and cleaning, said she hoped any reparations would include the deeds to lands she says belong to workers who have worked there for generations.

“For us, justice is not just that (the company) acknowledge the compensation and money owed to us, as the judge said, but also that they give us back our lands,” said Valdez.

“We want the state to recognize all the rights that we were denied. (The company) treated us like their slaves.”