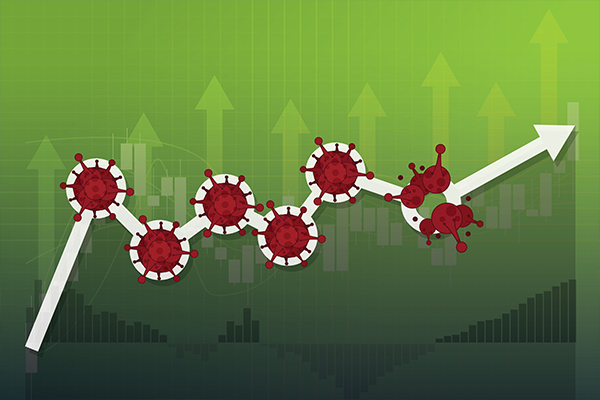 The bad year is gone. Hope of a good 2021 has set in. The bell tolls for a new India despite the burgeoning battle for coming out of the shadows of COVID-19. The economy is “reflating faster at a pace that beats most predictions”, says the Reserve Bank of India.

The bounce back it says may be faster in Q4 (last quarter of 2020-21) as the country prepares to present the new Central budget. The Credit Suisse adds to it saying the growth turn in Industrial policy can add 1.7 per cent to GDP by 2027 or 0.3-0.5 per cent a year. Nomura expects a gradual withdrawal of liquidity with higher policy rates.

Recent government measures and some other indicators suggest positive growth at a slower pace as the economy gradually unlocks. The RBI says business sentiments have moved to a recovery path though overall sentiments are yet to reach pre-pandemic levels as unprecedented lockdown brought activities to a grinding halt.

The pandemic hit major economies. Global growth came down to minus 4 per cent, advanced economies to minus 6 per cent and the Chinese economy to about two per cent, according to IMF World Economic Outlook of October 2020. The IMF says that in 2021 all economies are supposed to do better around 4 per cent or more but on a deflated growth in 2020. It projects 10.3 per cent contraction for India and RBI sees lower 7.5 per cent contraction. Overall Indian economic growth, as per IMF, may be 8.8 per cent in the next fiscal year. Since this would be on a low base effect of 2020-21(-23.9 per cent) so actual growth in 2021-22 may be lower than the 2019-20 level.

India did not lag behind in announcing stimulus and lending guarantees and pro-poor measures, including free food grains and higher rural employment guarantees. The relief to the people, however, did not reflect the rise in demand, perhaps because of contraction of the cash available to the people. The prolonged lockdown and a protracted slowdown made businesses ill-equipped to deal with the economic pain. The increasing bad debt problem with the banks, NBFCs and the financial sector added to difficulties though public sector banks were merged to create larger entities to meet global giants.

India’s sequential or month-on-month recovery looks better, according to Centre for Monitoring Indian Economy (CMIE) analyses of the Nomura India Business Resumption Index or Purchasing Manager’s Indices (PMI). The PMI suggest that economic activity has resumed to pre-pandemic levels. But the low base effect and low cash levels with the poor, who spend more and create the mass demand are unable yet to boost up the economic activities. Though many corporates have restored salaries, many still are unable to do so or are delaying payments. This apart, many who lost jobs during the pandemic have not yet got these back.

The recent labour codes have increased the working hours and are stated to have done away with many of the workplace safeguards. The wage-led growth is perceived to being replaced by profits, which in turn creates a smaller base. The new farm laws, though may open up markets for farmers, are likely to hit the rural inter-dependent social fibre and ultimately create much smaller base as many are feared to lose jobs or social support they have.

The society needs a larger base and the agriculture policy should not be dependent on the market controlled by companies. The APMC mandis may go through a process of reform but a parallel “market” may not be in the interest of the country.

Added to this are possibilities of opening up the banking sector to the corporate, wiping out the difference between the lender and borrower – reminiscent of pre-1969 nationalisation of banks – situation may not be beneficial. More so as the State Bank of India, Union Bank of India and Indian Overseas Bank have challenged the bankruptcy resolution of one of the biggest companies and say that their stake is ten-times larger than what Vijay Mallya owed to them. The policy makers need to go through the gamut before allowing such a move amid apprehensions that it would exacerbate the economic crisis.

India’s is a peculiar economy that is driven by the poor, who despite their low incomes are the largest purchasers and boost manufacturing, electricity, gas, mining and many other consumer demands. That is the practical economy and this needs to guide the country’s decision making. The present post-lockdown recovery is delicate. It requires participation of all and particularly the marginalised to decide on a course that would ensure sustained growth. Dialogue to create a New India is essential for setting the contours. It needs not only a correction but also prevention from plunging into past mistakes.

The RBI latest bulletins state the economy is coming out of abyss and with care could improve in medium term and gradually average the last 30 years’ growth track of 6.5 to 7 per cent. Credit Suisse supports it by saying that after a few years of downgrades of Indian economy, “we have reasons to upgrade”. It also feels that corporate tax cut and new labour codes too should help.

The gradual larger GST collection is also an indicator that production activities are gaining momentum. The industry wants concessions on e-invoicing and relaxations on many other issues to continue. The government’s impatience to have larger accrual is natural but the situation is fragile and a helpful attitude towards industry and businesses would be beneficial for the country in the long run. Many GST provisions are harsh and should be softened if the country wants to be atmanirbhar (self-reliant). China has taken such sustained steps for decades to help its entrepreneurship capture global markets. Indian systems on the contrary work on a ‘blow hot blow cold’ model and don’t trust the people.

The country can grow faster if the wealth of the people is not destroyed as some of the rules such as junking of cars and pollution control methods, high penalties of Motor Vehicles Act type laws or new number plates have done. Such scrapping of goods neither helps the economy nor boosts sales. Many prefer not to purchase such products because they would at the end have to lose to state laws. India has to prepare for the real challenges beyond 2021-22. The new Budget has to take care of the growth trajectory, soften many laws/taxes, create jobs and demand, and repose trust in the people. Softer rules and involvement of people is needed for a better economy.