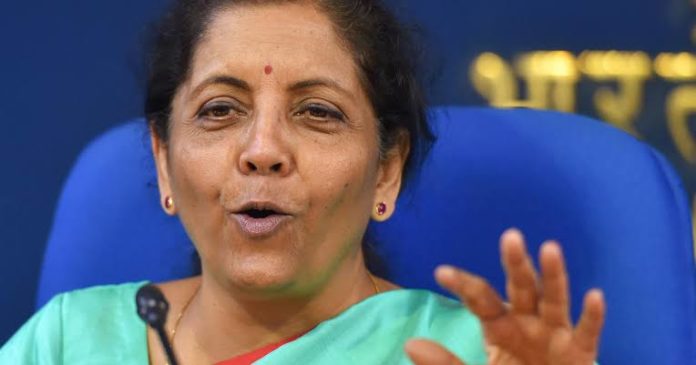 Finance Minister Nirmala Sitharaman said on Friday the government has taken concrete measures to implement a planned economic strategy for achieving the five trillion dollar GDP goal by 2024.
These include enabling retail credit by supporting non-banking finance companies (NBFCs) and housing finance companies (HFCs), clearing all government dues including those of public sector units, supporting micro, small and medium enterprises (MSMEs) via bill discounting and tax refunds. “The government has been working for the economy where it is needed. Results have started showing for the (economic) reforms we have taken,” she said while addressing a press conference here along with Chief Economic Advisor K V Subramanian and Revenue Secretary Ajay Bhushan Pandey.
Subramanian said total sanctioned support of Rs 4.47 lakh crore to NBFCs and HFCs includes Rs 1.29 lakh crore for pool buyouts of assets. The dues of 32 central public sector enterprises were cleared by more than 60 per cent in the past two months.
“The continuous liberalisation has resulted in record foreign direct investment inflows of 35 billion dollars in the first half of 2019-20 as against 31 billion dollars in the first half of 2018-19,” he said.
At the same time, corporate tax rates have been lowered up to 15 per cent. “Given a large market and large labour force, these tax rates make India more attractive than other countries.”
Subramanian said that under the new external benchmarking scheme announced by the Reserve Bank of India, more than 8.18 lakh or Rs 72,201 crore worth of loans were sanctioned till November 27.
To ensure liquidity in the economy, government and public sector undertaking dues of up to Rs 61,000 crore have been cleared in the past two months.
“Within two days of cabinet approval, 17 proposals worth more than Rs 7,000 crore were approved. Proposals worth Rs 20,000 crore will be approved over the next two weeks under the partial credit guarantee scheme,” he said.
Besides, on the investment side, the government has taken steps to boost investment, support real estate, credit expansion, corporate tax and bank recapitalisation.
On top of these, steps have been taken to boost consumption in the economy. Pandey said tax refunds this year total Rs 1.57 lakh crore compared to Rs 1.23 lakh crore last year.
Input tax credit (ITC) refunds were at Rs 33,395 crore in FY20 as compared to Rs 36,513 crore in FY19, he said.
“It will be compulsory for all taxpayers with a turnover of more than Rs 100 crore to generate e-invoice for all B2B transactions. The same will be optional for those businesses with a turnover of more than Rs 500 crore,” said Pandey.