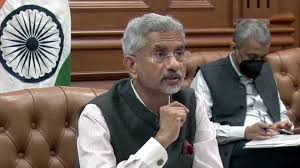 External Affairs Minister S Jaishankar has said the pandemic has laid bare the economic consequences of geopolitics and the risks associated with attempts at concentration of power. Speaking at IFRI in Paris on India’s Foreign Policy in post covid world, Dr Jaishankar said the pandemic has also highlighted the importance of ensuring supply chain diversification and resilience. He said, the world needs more trusted and capable players now and India fulfils both attributes.

The Minister said India has always been guided by its ancient philosophy of ‘Vasudhaiva Kutumbakam’.  Even during the pandemic, India ramped up its pharmaceutical production – especially of hydroxychloroquine and paracetamol – to respond to growing global demands. Dr Jaishankar said India supplied medicines to 150 countries, more than half on a non-commercial basis.

The Minister said that despite the pandemic, India  has dealt with the worst crisis in decades on border with China. He said country has done so with firmness and maturity. Dr Jaishankar said that at the same time, India has continued to ward off terrorism from across the western border.