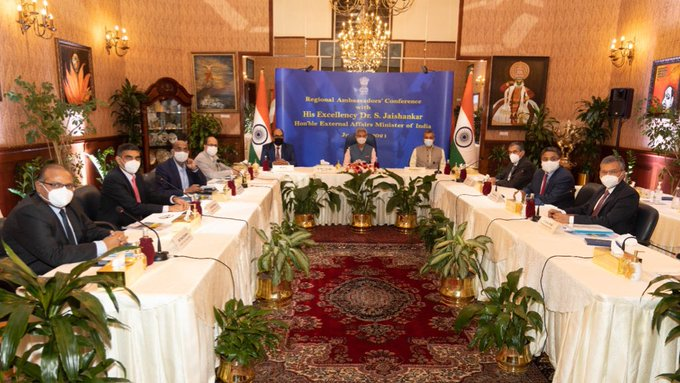 External Affairs Minister S Jaishankar has held a meeting with India’s envoys to the Gulf nations to discuss a host of issues, including encouraging the speedy resumption of flights to this region and facilitating reuniting families separated by Covid disruption.

Jaishankar, who arrived here on his first bilateral visit to the oil-rich Gulf nation early on Thursday, also unveiled a bust of Mahatma Gandhi at the Indian Embassy in Kuwait in presence of the ambassadors.

“Discussions focused on ensuring utmost welfare of the Indian community in respective jurisdictions, facilitating reuniting of families separated by Covid disruption, interceding for early return of Indian talent and skills who left the Gulf during the pandemic, encouraging the speedy resumption of flights to Gulf destinations to help NRIs and strongly push our trade interests that contribute to economic recovery at home,” he said in a series of tweets.

Jaishankar also exuded confidence that the ambassadors and embassies will deliver on these priorities.

Earlier in the day, he held “productive discussions” with his Kuwaiti counterpart Sheikh Ahmed Nasser Al-Mohammad Al-Sabah on Thursday during which the two sides discussed a range of issues including health, food, education, energy, digital and business cooperation.

The two sides also signed a memorandum of understanding (MoU) that will give Indian workers greater legal protection in Kuwait.

There are over 10 lakh Indians residing in Kuwait. India is amongst the largest trading partners of Kuwait and Kuwait is a major supplier of oil for India.

“Conveyed our felicitations on the 60th anniversary of diplomatic relations. Appreciated his commitment to taking our partnership to higher levels. Our historical ties have been reinforced through our joint fight against COVID19,” Jaishankar tweeted.

His visit comes nearly three months after the two countries decided to establish a joint ministerial commission to formulate a framework to strengthen ties in sectors like energy, trade, investment, manpower and labour and information technology.

Kuwaiti Foreign Minister Sheikh Ahmed visited India in March during which both sides decided to set up the joint commission.

The year 2021-22 marks the 60th anniversary of the establishment of diplomatic relations between India and Kuwait.
Kuwait has been supporting India in dealing with the second wave of the coronavirus pandemic by supplying relief material as well as medical oxygen. Indian Navy ships have brought a large quantity of medical oxygen from Kuwait in the last few weeks.