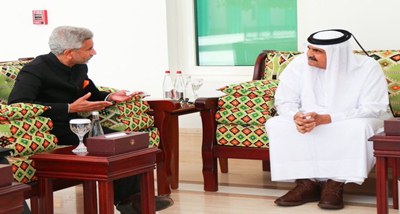 External Affairs Minister Dr. S Jaishankar called on senior leaders of the Qatar government and discussed various issue of mutual interest, on his second day visit of the gulf nation.

During his visit, Dr. Jaishankar has called on Amir of Qatar Sheikh Tamim bin Hamad Al Thani and handed over a personal message from Prime Minister Narendra Modi, inviting him to visit India and thanking Qatar for taking care of the Indian community during Covid-19.

The Amir has accepted the invitation to visit India at an early date.

He also recalled his telephone conversation with Prime Minister Modi during which both leaders had decided to set up Task Forces on investment and energy.

Both sides are in the process of implementing this decision.

The Father Amir appreciated the contribution of the Indian community in Qatar and recalled his visits to India.

Dr. Jaishankar extended invitation to him to visit India for the first Joint Commission Meeting in next year.

Congratulating L&T and Qatari partners, he said, it has enhanced India’s reputation for quality and delivery.

On Monday, Dr. Jaishankar interacted with the business leaders from Qatar appreciated their commitment for business partnerships with India and briefed them about new opportunities flowing from Atmanirbhar Bharat.

He has also held a virtual interaction with the Indian community in Qatar, appreciating their contributions.