While some people were trying to ‘save’ Dogri, the mother tongue of Dogras, Divya Vasu Sharma, a young entrepreneur, combined his skills and love for the language into something that has become popular among all.

His endeavour, a mobile application titled ‘Dogri Stickers’ is helping the sweet language regain its lost charm and importance, even with the young generation. 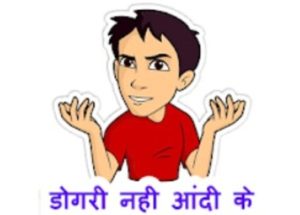 Divya Vasu says, “I believe, we owe a lot to our surroundings, like to our culture, heritage, language and nature. Doing something for our language, Dogri, was always in my mind and WhatsApp gave me an opportunity to give an interesting touch to our mother tongue.”

“I have done my schooling from the Heaven Kingdom School, up to matriculation, and then from SP Smart School. For my engineering, I went to Punjab Technical University, that is when I realised that unlike Dogras, Punjabis love their language and are not hesitant in speaking in Punjabi.”

“We went ahead with the concept, developed an app titled ‘Dogri stickers’. The response is unprecedented and unexpected. In less than a month’s time, we are touching 15k downloads.”

“We are bringing the updated sticker pack very soon, also, with an iOS version of the app,” he announces proudly. 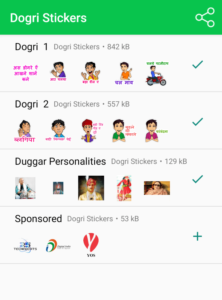 On being asked, what made him come back to Jammu, and take a ‘risk’ of starting his own IT company 25 Technoarts, he says, “Jammu is not just my birthplace, but a place which is inseparable to me. I didn’t take up a job at some reputed MNCs with lofty packages only because I couldn’t live without my city and family. Even during my engineering, I used to visit Jammu quite often.”

“I acquired some skills and went for establishing a startup in my city. With the kind grace of Mata Rani, my small endeavour gradually became successful and I started working on projects from outside the state. Also, I always focused on sharpening my skills.”

“From full stack development, Android, data analysis, to 3D clones, and of late, VR technology are the skills that I acquired through online courses.”

Divya Vasu is grateful to his family for their love and support throughout the journey. “My parents have always supported me and had faith in my abilities. Whenever I used to be upset or felt low, they used to boost my morale and say “KOI BAAT NAHI AGLI BAR HOJAYEGA”. There is no substitute for parents’ love.”

“My younger brother Aadishesh is ten steps ahead of me in Information Technology. To be honest, he guides and helps me in many bugs I face while working.”

“I’ve found a great life partner in my wife, to whom I got married last year. Though she hardly understands my work, but has faith in me, and that is sufficient for me.” 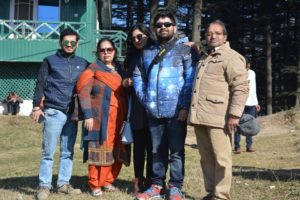 talking about the vision of his company, he says, “My vision for my company, 25 Technoarts, is to provide a cutting edge technology in a creative way. We envisage bringing Jammu on the IT map of the nation.”