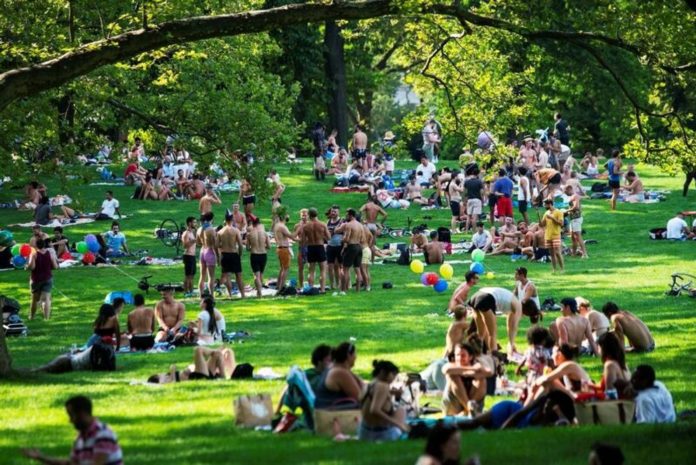 NEW YORK: Parks in primarily nonwhite neighborhoods are half the size and five times as crowded as parks in mostly white neighborhoods, putting communities of color at risk during the summer heat, research showed on Wednesday.

In low-income neighborhoods, parks are four times smaller and four times more crowded on average than parks in high-income areas, said the study by the Trust for Public Land, a nonprofit that analyzed government data from 14,000 U.S. towns and cities.

The findings come as Americans are flocking to parks after months of lockdown to help prevent the spread of COVID-19 in a summer that forecasters say could be the hottest on record.

“People of color and poor people don’t have access to large parks and all of the health benefits that wealthier and white people have,” said Adrian Benepe, senior vice president of the Trust and former New York City Parks Commissioner.

With trees and open space, parks mitigate exposure to higher temperatures, and areas within a 10-minute walk of a park can be as much as 6 degrees Fahrenheit cooler than areas further away.

More than 700 people on average die each year in the United States due to extreme heat, according to the U.S. Centers for Disease Control and Prevention.

The U.S. National Oceanic and Atmospheric Administration has said there is a 50% chance that 2020 will be the hottest year on record.

“Health isn’t determined only by our interactions with a doctor or nurse. It’s determined in our community’s well-being,” said Sadiya Muqueeth, director of community health at the Trust.

“And when your community resources are deprived, you’re going to have problems before you even walk into a doctor’s office.”

Summer temperatures in cities are exacerbated by heat-trapping buildings, streets and sidewalks, and this year many public beaches and pools are closed due to the coronavirus, Muqueeth said. In addition, the pandemic has limited the capacities of cooling centers, she added.

City leaders need to build green spaces where there are opportunities, such as under elevated train platforms and in abandoned lots and school yards, the researchers said.

Elected officials also need to step up and create parkland in communities where it does not exist, they added.

“The key is that cities have to have vision, courage, tenacity, make plans and spend a lot of money,” Benepe said.

“Particularly now, with all of the bad economic circumstances, it’s unlikely they’ll do it, but they really need to.”