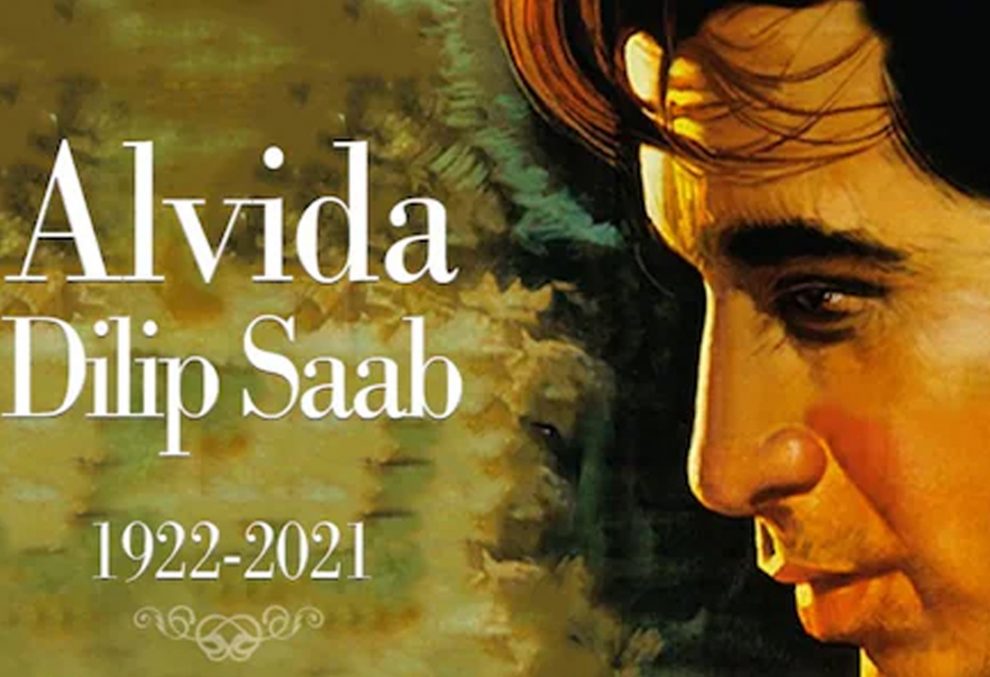 SRINAGAR: As Bollywood’s only ‘tragedy king’ and the first-ever superstar was laid to rest in Mumbai, his Kashmir fans have poured tons of emotional memories on social media.

The legendry actor, Dileep Kumar, 98, originally Yousuf Khan, died at Hinduja Hospital in Mumbai after years of being bed-ridden

The first superstar of Bollywood was in love with Kashmir. Some media reports said his wife has Kashmir origins.

In Kashmir As Child But not many people know that Dileep Kumar had a strong Kashmir connection much before he became an actor.

“As a child, he and his brother were diagnosed with tuberculosis and the doctors suggested to their father to take them to a hill station, for a long stay,” as per the report quoting   Haseeb A Drabu said.

“His father, Sarwar Khan was a fruit forwarding and commission agent with business relations in Kashmir, one of his suppliers was my grandfather, Khawaja Ghulam Hassan Drabu. So he sent the young Yusuf Khan and his brother to stay at my grandfather’s residence at Rajpora. The two brothers stayed there for around eight months and left only after recuperating”. Drabu remembers his father telling him that the two brothers who were very weak and emaciated would mostly stay inside the house and stepped out only to rest in the shade of the Chinar in their garden.

Later in the seventies, Drabu said, “when my uncle was the excise commissioner, he got a call from the protocol department that Dilip Kumar wanted to meet him. He then visited our residence at Gogji Bagh and asked the family about his memories and attachment with the Rajpora house and even suggested making a film Haveli, which he could not do.”

That the actor started his life as an apple supplier in a canteen is no coincidence. He used to explain this venture saying that he had an excellent shinakht (identity) of apples having seen his father trade in Kashmiri apples”. The Pahalgam Summers After becoming an acknowledged actor, he would spend almost every summer in Kashmir

Kumar had a circle of his own in Kashmir. One of the closest friends was Bakhshi’s son Bashir Ahmad Bakhshi. Apart from hotel, cars and horse-men, he had his own circle that would cater to him and his friends. Many people believe that his wife, Saira Bano had Kashmir origins and was born actually in Kashmir. (There is no substantiating detail, though.) A senior officer who served the government said Kumar was hugely in the love of Kashmir hospitality and the Kashmir curry was one of his major weaknesses.

“Unlike many of his friends and contemporaries, Dileep Kumar was a learned man; he would always be seeking knowledge about Kashmir and would engage knowledgeable people in longer discussions.” Kumar’s love for Pahalgam had led Om Prakash, one of his friends to invest in a hut on the banks of Lidder. People aware of the investment said since the Bollywood actors were not state subjects, they had invested in the hut that was owned by a Kashmiri. “Then militancy erupted and nobody knew what happened to that hut,” the person said. Media Interactions Imdad Saqi who had interviewed Kumar for Aftaab said the legendry actor and his friends would shire a house in Nishat and would spend a week altogether. “They would usually not talk to people but somehow when I approached he gave me an appointment and we spent almost two hours together,” Saqi said. During his frequent Kashmir sojourns, Doordarshan has done at least two full-length interviews of the Bollywood legend – one by Mazhar Imam and another by cartoonist Bashir Ahmad Bashir. On another occasion, he agreed to interview the visiting Pakistani singer Noorjehan for Doordarshan when she visited Kashmir. Most of these records were decimated by the 2014 floods. Insiders in the Doordarshan said all these interviews were recorded in Dachigam national park. One of the three interviews came after a faux pause when the legendry actor refused to be interviewed by a person whose pronunciation was terribly bad. Bashir A Bashirremmbers the conversation. There were two elements to the conversation, Bashir said. One, Kumar was treating Kashmir as the ideal place where one can think. He told me that most of his productions including Ganga Jamuna had Obsessed With Kashmir Dileep Kumar had a huge fan following in Kashmir. He was a strong votary for India Pakistan friendship. One of his famous lines was that “I want to see flowers on either side of the border and not the missiles.”

He wanted the two countries to sit down and settle the dispute over Kashmir once for all. Dr Farooq Abdullah who was a personal friend of Kumar said the “tragedy kind” had a strong desire to do “something big for this region”. “Whenever I met him, he expressed his desire to do something for Kashmir,” media reports quoted Dr Abdullah saying.

“Unfortunately, the legendary actor could not get the opportunity to fulfil his dream to do something for Kashmir.”

Popular Actor Author Khalid Bashir Ahmad has mentioned in his book Looking Back in Time- Politics, Culture, History that Kumar’s films would run packed houses in Kashmir. He has mentioned the premiering of the film Gopi in Srinagar.

Qayoom, who had also interviewed him once, said. “The fact is that he has millions of young men and women who mourned his death.” Qayoom said he was in love with Kashmir. “One day, he went to Broadway and Raj Begum was singing,” Qayoom said.

“After watching her sing, he got up, gave her some golden thing and said loudly – Kashmir is distinct because it has Rista, Gushtaba and Raj Begum,” Qayoom said his Urdu was impeccable and his pronunciation had no match.

Unlike the Bollywood actors, he was never even at the margins of a scandal. Helping People People who knew him said that Dileep Kumar used to do a lot of charity without making news of it.

“He financed and educated one Kashmiri who eventually became a famous dentist in Kashmir but he never talked about that. He would keep him at his home and treat him like his son.

” His love for Kashmir would reflect by his positive interactions with the government in Jammu and Kashmir. He would always be responsive to the requests by the state government, Irfan Yasin, former senior KAS officer, remembers one such function in 1983 when B R Singh, a senior IAS officer, invited Dileep Kumar and Saira Bao to dinner at hotel Dar ul Salam on the banks of Nigeen lake. The dinner was remembered by the introduction of Mohammad Yousuf Khan, who later became the JK Bank chairman.

He went to Dileep Kumar and introduced himself: “I am Yusuf Khan but not Dileep Kumar,” this amused Kumar, Irfan wrote. For around one and a half-decade, his assistant was a Kashmiri short-story writer – Deepal Kanwa, who now lives in Mumbai.

Kanwal had written around 40 short stories and had done a feature film as well. Kumar had given him an Assistant Director’s position in the making of Kalinga, a film that never happened. Kanwal lives in Mumbai. Kumar’s last formal Kashmir engagement was when former Chief Minister Mufti Sayeed called on him on April 30, 2015, at his Mumbai residence.

Drabu accompanied him as state’s culture minister. “Mufti sahib had a child-like excitement about meeting the legend and throughout the one-hour meeting seemed rapt in admiration of the actor,” Drabu remembers. “By then the actor was not even a pale shadow of himself and didn’t speak a word which was tragic since he was known for his eloquence, on and off the screen. But what left Mufti Sahab very impressed was how Saira Banu had taken great care of him and kept him, as he said, like a “groom”!”