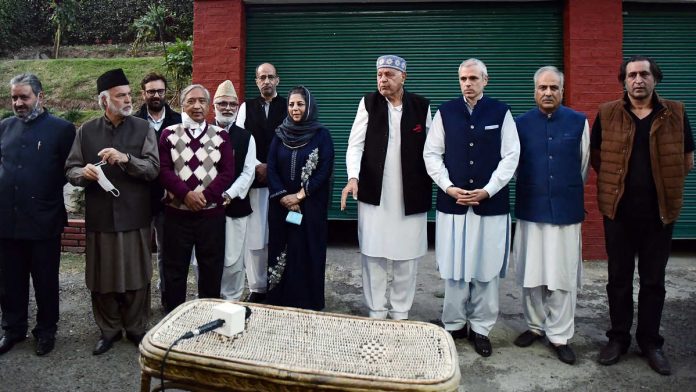 To be fair to all players, Kashmir is one of the trickiest places in the world for political operations. Given the modern history of Kashmir and the evolution of mainstream politics in Kashmir valley, it is not easy to maneuver mainstream politics in Kashmir valley given the contradictory aspirations of the people of various constituents of the former state of Jammu & Kashmir, of which Kashmir valley is also a part. In the erstwhile state of Jammu & Kashmir, each subregion was a complex mix of ethnic and religious communities with distinct history and different political aspirations and to balance among this all has always been very difficult for mainstream political parties. The fact that there has been a constant meddling of federal government in the political affairs of Kashmir valley for initial 5 decades since independence also did not help the consolidation of grassroot democracy, which was further complicated by the international conflict nature of Kashmir dispute and the three decades old insurgency, which has caused a widescale death, destruction and displacement in Kashmir. So how can a level playing field be created under such challenging circumstances, which can allow the germination of grassroot politics in Kashmir valley is a question that continues to perplex everyone.

When looked in this context, it is easy to see that the politics – both mainstream as well as separatist that evolved in Kashmir valley has been largely elitist, under the domination of few upper caste Muslim families, who have virtually run both the mainstream and separatist camps in almost feudal manner, where common Kashmiri Muslim – be it from lower caste or poor upper caste Kashmiri Muslim families have been used mostly as a cannon fodder for furthering different kind of political ideologies by the upper caste Kashmiri Muslim elite.It is interesting to note that Sheikh Mohammad Abdullah, founder of the modern mainstream politics in Kashmir valley recognized the upper caste ( both Hindu and Muslim) domination of the ruling elite very early on and based his politics among other on the issue of eradication of the dominance of the feudal order that existed in the former princely state of Jammu & Kashmir, which was reflected in the socialist bent of early National Conference and the revolutionary land reforms that was under taken by him. What is however ironical is the fact that Sheikh Mohammad Abdullah’s family itself turned into a new feudal lord of Kashmir, something that he set out to eradicate in the first place. But it is not just the Abdullah clan but all other dominant families that control not only mainstream political parties of J&K but also separatist groups that are also under strict dominance of few upper caste Kashmiri Muslim clans and families with little or no internal democracy. While this phenomenon of the furthering of nepotistic politics is not something that is unique only to Kashmir valley and is rather the prevailing reality of all parts of Indian subcontinent, in Kashmir valley, the same was exacerbated by the complete absence of grassroot politics, which gave an oversized importance to the institution of legislative body. For decades, the erstwhile state of J&K was deprived of the governance through grassroot democratic institutions like village panchayats, city municipal corporations and district & block level elected development councils. The ruling mainstream of erstwhile state of J&K regardless of whichever political parties, they came from used the excuse of instability and insecurity prevailing in Kashmir valley to either not implement the grassroot political system in J&K or to do so half-heartedly. This indirectly resulted in the existence of an almost feudal like political system in Kashmir valley, where mainstream politics at grassroot levels was inaccessible to many politically aspiring people from lower and backward castes Kashmiri Muslims as well as from poor upper caste Kashmiri Muslim families.

The ruthless implementation of this three tier grassroot democratic institutions in recent years has severely disturbed this old feudal order and exposed its hollowness, which has been exemplified by the recently announced DDC elections. The so called “Peoples Alliance for Gupkar Declaration”(PAGD), which was hurriedly cobbled together by the Kashmir based traditional mainstream political parties to supposedly fight for the revocation of Article 370 and 35A of Indian constitution and restoration of state hood of J&K is today a messy picture of petty political fight between different constituent elements for claim over tickets to DDC seats. The near ugly infighting not only among various constituents of PAGD but also within different constituents of PAGD for tickets has resulted into official and proxy fights on nearly all DDC seats. So, what happened to the high moralistic position taken by the PAGD to fight for the “honor” of Kashmiri people? The sad reality of Kashmir’s mainstream and separatist politics is its greedy and selfish control by few privileged upper caste Kashmiri Muslim clans, who have never allowed any space for political aspirations of common Kashmiri Muslims from poor upper caste or lower / backward caste Muslim families.

The introduction of Panchayat / Municipal, Block and now the district level grassroot political governance has finally given opportunity to a large number of politically aspiring Kashmiri Muslims to break this upper caste Kashmiri Muslim dominated old feudal order and forced this so called “Gupkar Alliance” to announce their participation in the DDC elections despite their supposedly high moralistic position taken just few weeks back of not fighting any election under the changed political status of the former J&K state. This is something which makes them a perfect example of political hypocrisy and opportunistic politics. This is indeed a political churning time for Kashmir’s politics, which is three decades late than the identity-based politics that took root in Hindi speaking state of UP and Bihar. While it is easy to blame everything on so called “communal forces”, the fact remains that it is the greed, complacency and opportunistic attitude of the upper caste Kashmiri Muslim leadership of traditional (and separatist) forces that eventually has led to the dilution of their influence and their increasing irrelevance and not so much the external circumstances. Had the political order been more representative in Kashmir for all these years, such a precarious situation would not have been faced by the mainstream and separatist political system of Kashmir including the DDC dilemma faced by the PAGD and the resultant hypocritic conduct by them.

The author is a Young politician, Writer and Political Analyst from Kashmir, who served as PRO to former CM of J&K. He . He can be reached at [email protected]