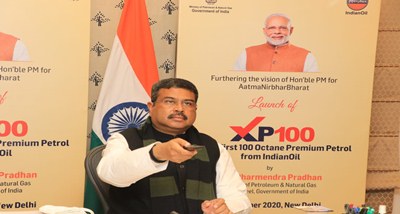 Union Minister for Petroleum and Natural Gas and Steel Dharmendra Pradhan launched India’s first indigenously developed 100 Octane premium petrol through video conferencing yesterday. He described the launch of the environment-friendly fuel as one more step towards facilitating ease of living for the citizens as envisioned by the union government under Prime Minister Narendra Modi.

AIR correspondent reports, the high octane premium grade petrol being marketed under the brand XP-100 will be made available in 10 cities across the country including the national capital in the first phase. The second phase will see the addition of 5 more cities like Kolkata and Chennai. With the rolling out of XP-100 developed by Indian Oil Corporation Limited with indigenous technical know-how, India joins a select league of nations having such super grade fuel. Octane ratings are measures of fuel stability that increases engine efficiency.