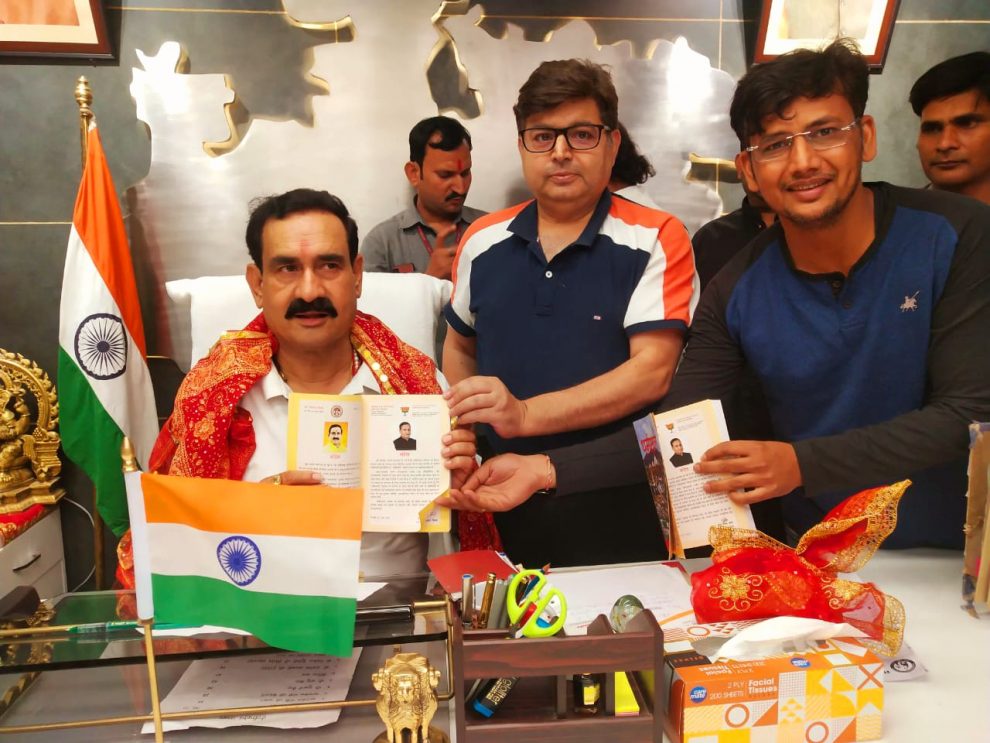 Jammu: A few days back, a book named ‘Dharmasthali’ has been edited and published by Mahant Rohit Shastri, President of Shri Kailakh Jyotish and Vedic Trust. In which the history of the ancient temples of Jammu and Kashmir has been published. Which was released a few days ago by His Excellency the Lieutenant Governor of Jammu and Kashmir, Manoj Sinha. On Tuesday,Trust Secretary Rakesh Gandotra and trust member Dr. Kapil Bargav presented this book to  Madhya Pradesh Home Minister Dr. Narottam Mishra. During this, Madhya Pradesh Home Minister Dr. Narottam Mishra said that a book named ‘Dharmasthali’ will promote religious tourism, he congratulated Mahant Rohit Shastri on its successful publication. Mahant Rohit Shastri said that Jammu is famous all over the world as the city of temples. Every year lakhs of tourists from different parts of the country and abroad arrive in the state, who return after enjoying the valleys of Kashmir by bowing their heads in the court of Shri Mata Vaishno Devi. Locations have been shown on the tourism map by the state government to entice tourists to come to Katra along the valleys of Kashmir. There are other famous temples of Jammu and Kashmir in the same Jammu and Kashmir. Thousands of devotees come here for darshan. There is immense potential for tourism here. Despite this, till date these temples have not been linked with world tourism. Due to which employment is not available to the people here. If the government brings all the ancient temples of Jammu and Kashmir on the world tourism map, then the development of the temples and the region will also take place. Tourists also often wish to go to such a place where as soon as they get down from the vehicle, they can reach a beautiful place and enjoy the beautiful views or can be exposed to the history of the religious place. And with such efforts, it would be possible to re-establish the Sanskrit religion-philosophy which was extinct in the state. With the coming of temples on the tourism map, tourists will be exposed to the history of religious places, religious places will develop, people will get employment and the economic condition of the state will be strengthened.