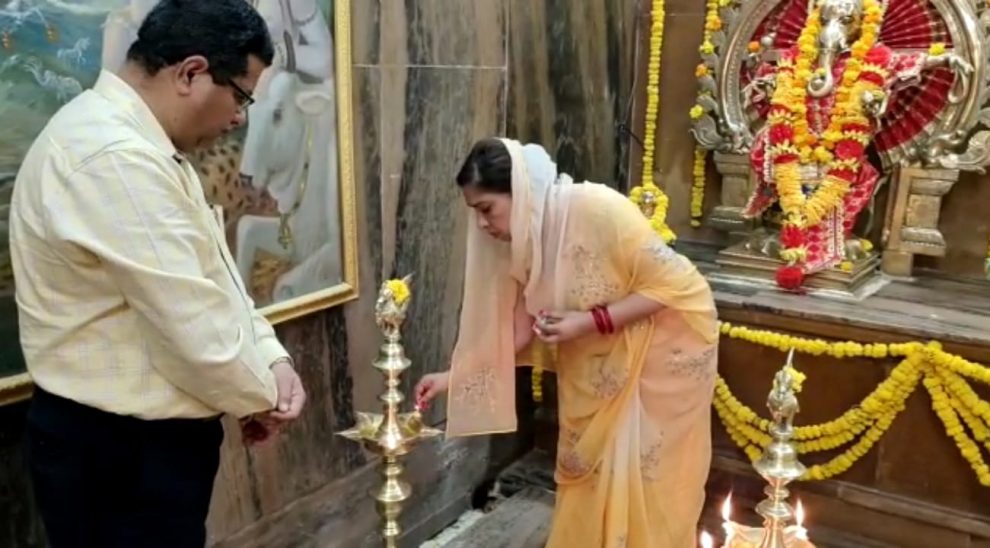 JAMMU: In yet another religious endeavour, Dharmarth Trust J&K on Monday celebrated Bagalamukhi Jayanti with traditional fervour and gaiety here at Natraj Temple inside the premises of historical Shri Raghunath Temple.

In this connection, a mega Hawan by renowned preachers of Vedas from Chitrakoot and New Delhi along with Pujaris of Shri Raghunath Temple performed followed by Arti in the temple of Mata Bagalamukhiji.

Speaking on the occasion, Ritu Singh said that Mata Bagalamukhi is one of the ten Mahavidyas (great wisdom Goddesses) in Hinduism. “Mata Bagalamukhi Devi removes the devotees’ misconceptions and delusions (or the devotees’ enemies) with her cudgel. She is also known as Pitambara”, she said, adding that the younger generation should visit the shrines and temples to have knowledge of rich culture and traditions associated with this great land of seers and saints.

Ajay Gandotra, President J&K Dharmarth Trust said that Trust has the history of paying focused attention towards religious activities in the region and the people associated with this over hundred years old institution never fail in fulfilling their responsibility of carrying out conventional religious obligations.

Gandotra said that today’s celebrations of Mata Bagalamukhi Devi Jayanti and several others in the past are being carried out flawlessly in the temples and shrines of Dharmarth Trust since decades and every constituent of the Trust gives his or her hundred percent in ensuring success of these religious functions and events. He said that the role played by the Royal Family of erstwhile state of Jammu and Kashmir in keeping up the religious traditions of this region is impeccable and people associated with the Trust are keen to put in their best to continue with the rich legacy of this institution as far as taking care of temples and shrines in the region is concerned.

On the occasion, a community kitchen (Langar) was also organized for a large number of devotees who took part in the celebrations.