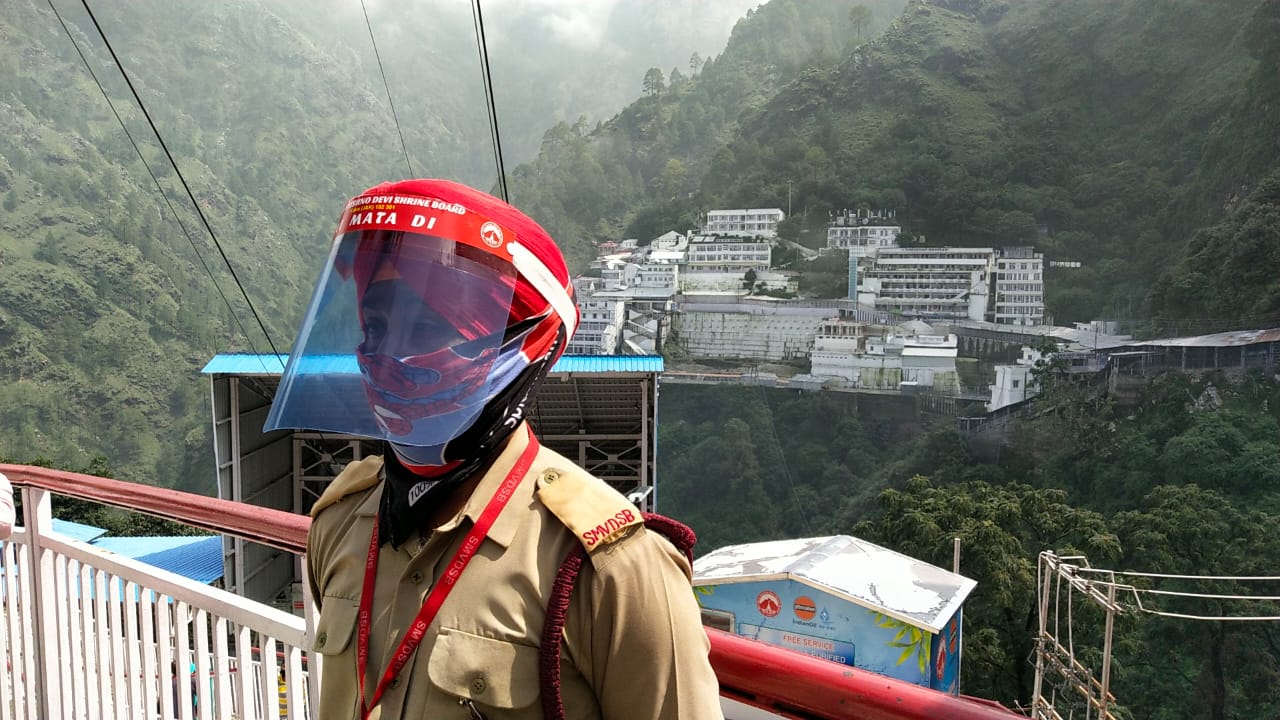 Katra: Khushvinder Singh is part of a 12-member group from Jammu who reached Katra before dawn to pay obeisance at the famous Mata Vaishno Devi Shrine atop Trikuta hills in Reasi district of Jammu and Kashmir.

The shrine along with other religious places across the Union Territory reopened for devotees on Sunday morning after remaining closed for almost five months due to the COVID-19 outbreak.

“I used to come to the shrine at least once every month to offer my prayers. I feel blessed to be back on the first day of the reopening of the shrine,” the 48-year-old Singh.

Singh had reached Katra, the base camp for the pilgrims visiting Vaishno Devi shrine, around 4 am and was among the first batch to offer prayers at the sanctum sanctorum – the holy cave which is the ultimate destination of the pilgrims.

The gates of the shrine reopened for the devotees around 6 am and Chief Executive Officer (CEO) of the Shri Mata Vaishno Devi Shrine Board (SMVDSB) Ramesh Kumar was seen taking last minute review of the measures to ensure safety of the pilgrims from the dreaded disease.

“The Vaishno Devi pilgrimage was stopped on March 18 as a precautionary measure to prevent the spread of COVID-19 and now when the administration had decided to reopen the religious places, the board had taken all necessary measures keeping in mind the challenge posed by the dreaded disease,” Kumar said.

In the first week, there shall be a cap of 2,000 pilgrims each day, of which 1,900 would be from Jammu and Kashmir and the remaining 100 from outside.

“The government has come out with a detailed Standard Operating Procedure (SOP) and the pilgrims are requested to follow the guidelines for their own safety and the safety of others,” Kumar said while inspecting the automatic thermal screening point which along with hand sanitizer was set up along the entry point dotted with circles to ensure social distancing.

Only the pilgrims who have registered themselves online are being allowed to undertake the pilgrimage.

The pilgrims are directed to use traditional routes — from Katra to Bhawan via Banganga, Adhkuwari and Sanjichhat — to reach the shrine and Himkoti route-Tarakote Marg for their return journey.

“The pilgrims, coming from red zones, and outside Jammu and Kashmir would have to undergo COVID-19 test and only those pilgrims with negative reports will be allowed to move towards Bhawan,” Kumar said.

Children below 10 years, pregnant women, persons with comorbidities and those above 60 years have been advised to avoid religious places for the time being.

A massive sanitisation campaign was launched by the shrine board right from Katra to Bhawan before the resumption of the pilgrimage.

“We were waiting impatiently for the reopening of the shrine and I am feeling good to be here. We are thankful to the Lt Governor administration for the decision,” Mohit Sharma, a resident of R S Pura area of Jammu, said as he set out for the Bhawan from the Bal Ganga entry point.

He lauded the shrine board for its preventive measures and said “prayers are also needed to overcome this pandemic”.

“We have come to seek the blessings of the Mata to overcome our troubles,” Pankaj Sharma said as he displayed hand sanitizers and face masks while moving towards the shrine.

He said the devotees need to give full support to the shrine board which is doing its best to ensure the safety of the pilgrims.