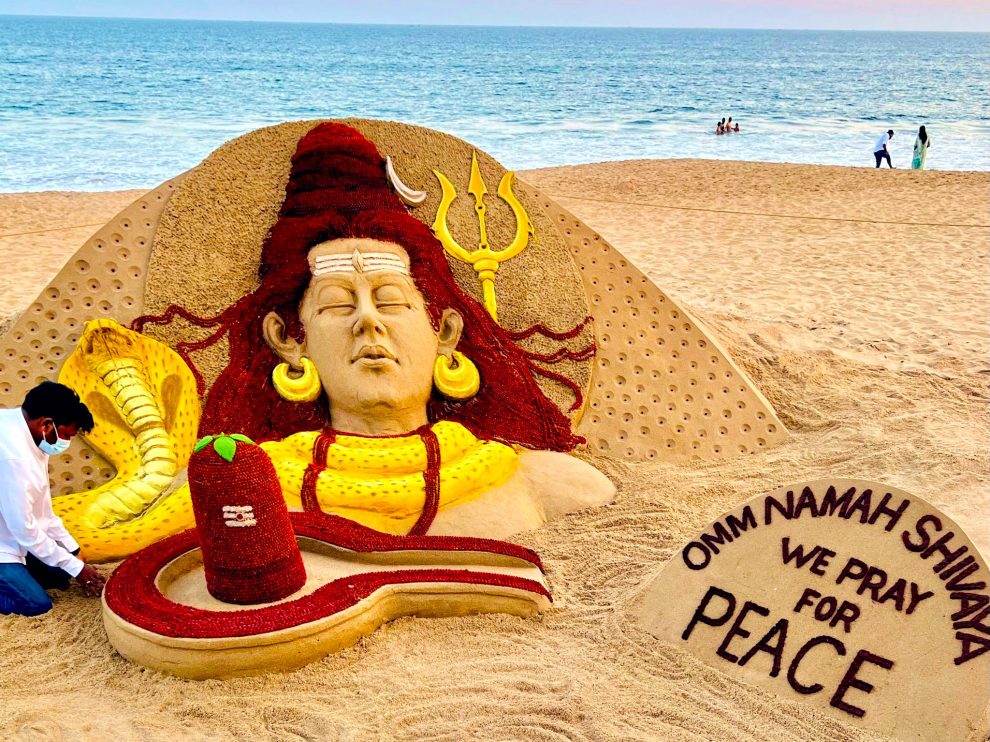 Jammu: Devotees across India thronged temples of Lord Shiva on Tuesday to offer prayers on the occasion of Maha Shivaratri.

Considered one of the most auspicious festivals of Hindus, Maha Shivaratri, the literal translation of which is ‘the great night of Shiva’, was celebrated with great fervour at Shambhu Mahadev temple in Jammu and Kashmir’s Reasi district.

Devotees were also seen participating in the celebrations of Maha Shivaratri at Mahakaleshwar temple in Madhya Pradesh’s Ujjain.

The national capital too witnessed a sea of devotees offering prayers on the occasion.

Other than prayers as means to celebrate the occasion, sand artist Sudarshan Patnaik used over 23,000 Rudrakshas to make an idol of Lord Shiva on a beach in Odisha’s Puri.

It’s believed that while there is a Shivaratri every lunisolar month of the Hindu calendar, the Maha Shivaratri happens only once every year, in February/March, when winter comes to an end and spring and summer begin.

Out of the 12 Shivaratris observed in any given year, Maha Shivaratri is considered especially auspicious, as it is supposed to be the night of convergence of Shiva and Shakti, which in essence means the male and feminine energies, that keeps the world in balance. Shiva and Shakti are revered as the embodiment of love, energy, and unity.

There are different legends on the significance of Maha Shivaratri.

One of them claims that Lord Shiva and Goddess Parvati tied the knot on this day. Purusha (mindfulness) is embodied by Lord Shiva, whilst Prakriti (nature) is embodied by Maa Parvati. With the union of both consciousness and energy, it facilitates creation.

Another story says, during Samudra Manthan, a pot emerged from the ocean which consisted of poison. All the Gods and demons were terrified that this will destroy the entire world and so, Gods went to Lord Shiva for help.

To protect the entire world from the evil effects, Lord Shiva drank the entire poison and held it in his throat instead of swallowing it. Due to this, his throat became blue and hence he came to be known as Neelakantha.

On this auspicious day, followers and devotees of Lord Shiva observe fast and special pujas are performed in several temples across the world. They offer milk to the Shivalinga and pray for Moksha.

Several devotees pray the whole night, chant mantras in praise of Lord Shiva. Besides the celebrations of the marriage of Shiva and Shakti, unmarried women pray and observe fasts on the day to wish for a partner as compassionate as Lord Shiva. On this day, fairs and cultural programmes are also organised in various temples.

It is believed that those people who perform puja, fast, and offer prayers to Lord Shiva are blessed with good luck. Many people also think that Maha Shivaratri fast reminds devotees that pride, ego and falsehood lead to downfall only. All in all, this is a day when positivity wins over negativity.