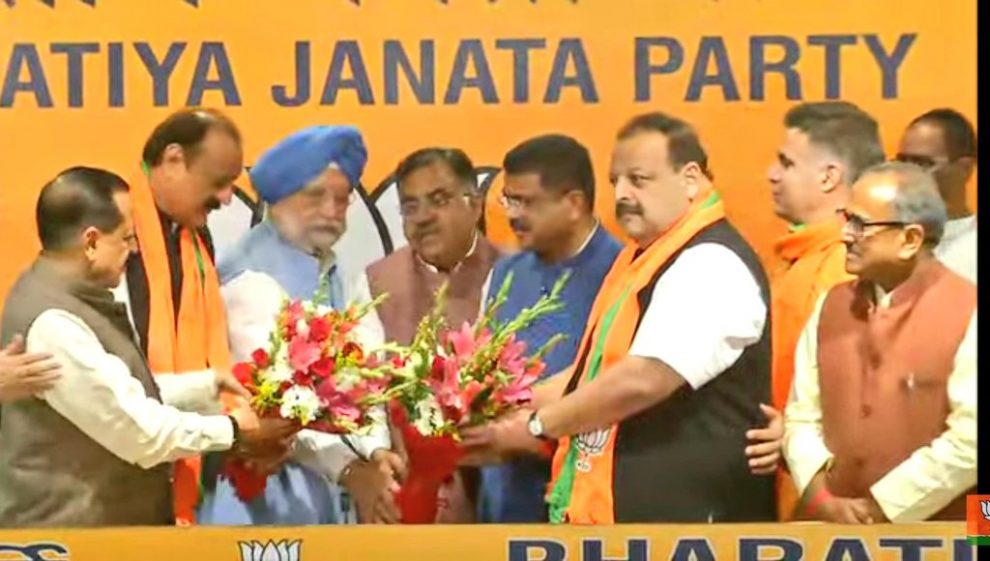 Devender Singh Rana, who resigned from the National Conference on Sunday, said his Jammu declaration’ is a political roadmap and he will single-mindedly work for it even at the peril of his political career.
Rana, who was provincial president of the NC for the Jammu region, along with senior party colleague and former minister Surjit Singh Slathia, resigned from the basic membership of the party on Sunday. They are likely to join the BJP in Delhi on Monday.
Jammu declaration is a way forward for respecting the urges and aspirations of all the regions and sub-regions of Jammu and Kashmir with none being discriminated against or dominated politically, socially and economically, Rana, who is the brother of Union minister Jitendra Singh, said.
Each one, irrespective of region, religion or caste must have equal rights on resources and in governance. Fair play and justice should not only be the bedrock of the political system but even the perception of one being appeased at the cost of other due to politico-strategic expediencies should become an imperative of the past, he added.
Addressing his supporters in Nagrota, the former MLA said, The Jammu region has hugely suffered on all these counts over the decades.
Vowing to pursue Jammu declaration, a political roadmap emanating from Jammu to forge unity and reinforce trust between diverse communities and divergent regions of J-K, religiously and resolutely, Rana described the concept as the key to retrieving back the glorious ethos of inclusive Jammu and Kashmir to its pristine glory again.
Nothing will deter me in realising this objective and I will single-mindedly work for it even at the peril of my political career, he said.
Rana exuded confidence that the Jammu declaration would eventually lead to offsetting the faultlines created between the regions, various segments of society, as also with the rest of the country.
The trust deficit of decades is, therefore, needed to be bridged for ensuring harmony and unity between peoples and the regions and sub-regions in this part of the country, he added.
Rana said the narrative coming for secular Jammu would set in motion the process of intra-region and inter-religious discourse, crucial for unity and harmony.
The engagement has to be holistic, between regions, sub-regions, religious communities and ethnic groups. All these form the core of the land of saints and sages from times immemorial, he said.
This glorious heritage is required to be retrieved, sustained and further strengthened to bequeath posterity the great legacy of the ancestors, who made Jammu and Kashmir proud. To achieve this, a collective effort is needed to find out the genesis of faultlines and to suggest course correction measures, he added.
Rana said the Jammu declaration has caught the imagination of the people in general and intelligentsia, civil society and the entire political class in particular, as it holds promise for marginalised segments of society and neglected regions and sub-regions.
He said Jammu has to play a major role in making the declaration a success and this will be a befitting contribution towards the idea of J-K and the idea of India.
Rana urged the people of Jammu to be the flag bearers of the narrative of inclusive Jammu and Kashmir, the core of the Jammu declaration, as it did not reflect the agenda of any individual.
It is an agenda of the people, by the people and for the people of Jammu and Kashmir, who have suffered economically, politically and psychologically over the years. Now the time has come to end the era of uncertainty and usher in the era of peace, progress and development, he said.
By holding the banner of Jammu declaration, we have nothing to lose but everything to gain by making J-K a better place to live in and a real jewel in the crown of our great nation , he said.

JCO among 5 soldiers killed in encounter with militants in Poonch
Encounter breaks out in forest area of Surankote, Poonch
Comment