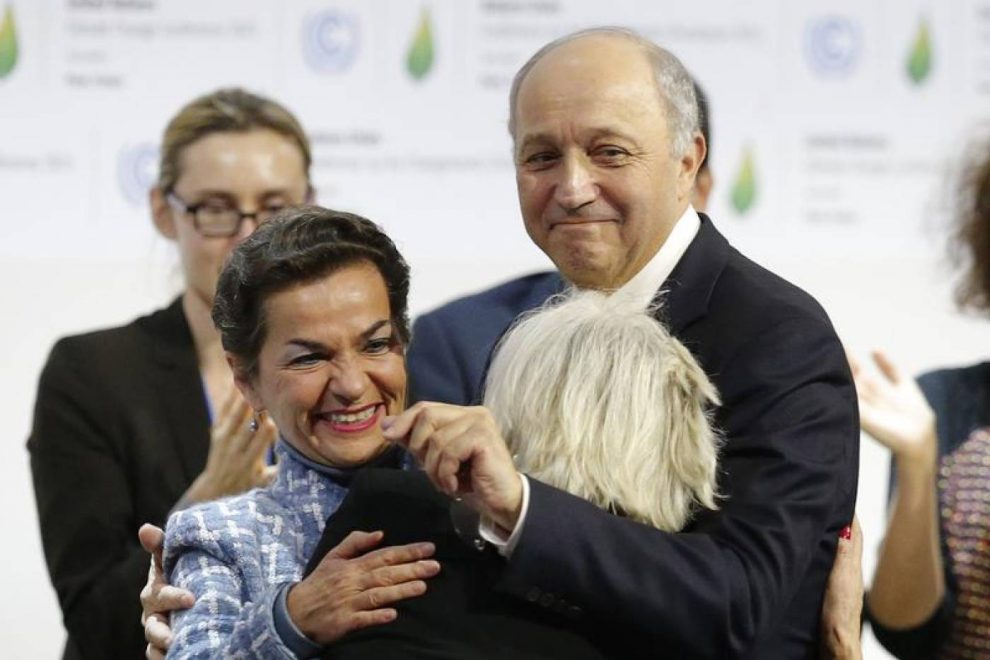 BARCELONA: As the gavel went down on Dec. 12, 2015, signalling the adoption of the Paris Agreement on climate change, 5,000 people in the room jumped to their feet crying, embracing, clapping and stomping, then U.N. climate chief Christiana Figueres remembers.

“I have never heard as much ruckus as there, from people who usually protect their public decorum,” she said. “It was just the most amazing moment.”

Five years on, ahead of a “Climate Ambition Summit” to mark the anniversary of the deal, the Costa Rican diplomat said she remained optimistic about the chances of meeting the accord’s goals to curb global warming.

Progress is happening “not as quickly as we want it to, but it is definitely moving forward”, she told an online media briefing before Saturday’s summit hosted by the United Nations, Britain and France.

A year before the Paris pact was sealed, she said, it seemed inconceivable that countries, corporations and investors would agree to cut their planet-heating emissions to net-zero by 2050.

Achieving net-zero means releasing no more greenhouse gases than can be offset elsewhere, through measures such as protecting carbon-storing rainforests.

But commitments by national governments, cities and businesses to reach net-zero by mid-century today cover more than half of global emissions – and once U.S. President-elect Joe Biden takes office in January, the figure will top 60%.

Achim Steiner, head of the U.N. Development Programme, noted that only one country among the more than 190 signatories had left the Paris accord – the United States – and Biden had promised to rejoin quickly.

Fears that other countries might follow the lead of the United States under climate-change sceptic President Donald Trump failed to materialise, Steiner said.

The Paris Agreement is “alive and kicking”, he told the Thomson Reuters Foundation – even with a year’s delay to COP26, the next major U.N. climate talks in Glasgow, which were moved to November 2021 as a result of the coronavirus pandemic.

However, despite momentum picking up on longer-term goals to phase out planet-heating emissions, concerns persist about lacklustre efforts to rev up action in the coming decade.

To meet the Paris Agreement’s most ambitious goal of limiting the rise in average global temperatures to 1.5 degrees Celsius above preindustrial times, emissions need to fall by about 45% by 2030 compared to 2010 levels, the U.N. climate science panel has said.

The planet has already heated up by about 1.2C, and the United Nations said this week that annual greenhouse gas emissions reached a new high in 2019, putting the world on track for an average temperature rise of more than 3C this century.

Laurent Fabius, the French politician who brought down the gavel to seal the Paris accord, said governments needed to “not only have long-term objectives but middle-term and short-term objectives”, to get necessary action moving now.

The Paris Agreement set a 2020 deadline for countries to deliver stronger versions of the climate action plans they first submitted in 2015.

Under the accord, such plans should be adjusted every five years to ensure they are on track to achieve the pact’s goals.

Early this year, however, the COVID-19 pandemic hit, strangling economies as lockdowns were imposed to curb the spread of the virus and diminishing government capacity to deal with other pressing issues like climate change.

On Thursday, U.N. climate chief Patricia Espinosa said climate action could not be pushed down the road, despite the obstacles.

“If nations delay yet another five years to table stronger plans, our window of opportunity will likely be closed,” she warned.

More than 75 leaders are scheduled to address Saturday’s online summit, with those speaking required to announce more ambitious plans to cut emissions and adapt to climate change, long-term strategies to reach net-zero or new finance pledges.

The COP26 Coalition, an alliance of civil society groups, said that without faster action, climate change would have catastrophic impacts, far beyond those already occurring.

They decried what they predicted would be a “hollow lack of ambition” in Saturday’s announcements.

“Another climate jamboree with empty promises and plans that don’t add up means little when in every corner of the planet killer floods, droughts and famines are already destroying the lives and livelihoods of people who have done nothing to cause this crisis,” they said in statement this week.

Only about 20 countries, including Rwanda, Norway, Mongolia, Brazil and Jamaica, have so far sent in new or updated national climate plans, according to the online Climate Watch tracker managed by the World Resources Institute (WRI).

Those represent less than 8% of global emissions, it noted.

But more than 125 governments have indicated their intention to deliver enhanced climate action plans.

The vast majority are expected to land their contributions before next November’s U.N. climate negotiations.

WRI president Andrew Steer said the plans were about putting in place a roadmap to the “north star” of net-zero emissions.

He and many other climate experts welcomed recent pledges by heavyweight economies such as China, Japan and South Korea to become carbon-neutral by mid-century or soon after.

“The big challenge for the coming year is to translate those terrific longer-term commitments into what is going to be happen in the 2020s,” Steer said.

More than 1,000 corporations have also joined an initiative to meet the Paris targets by decarbonising their supply chains, he noted, including household names like Walmart and Microsoft.

While the benefits of investing in a green economy are becoming clearer, Steer and others warned governments had so far put too much of their COVID-19 recovery spending into supporting industries that rely on fossil fuels.

The next two years presented “the biggest opportunity in history” to clean up the world’s act, with $10-20 trillion in stimulus likely to be spent, Steer said.

“If we invest that in yesterday’s economy, we are basically committing a mortal sin for our grandchildren,” he added.