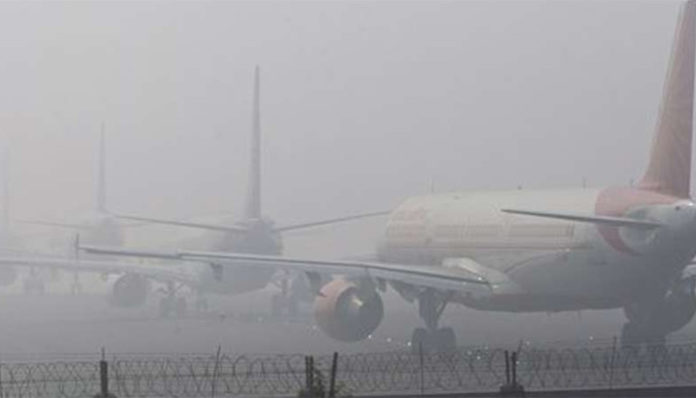 Dense fog engulfed the Capital affecting flight operations at the Indira Gandhi International Airport, causing delays across the rail network in northern India and disrupting traffic during peak office hour on Monday morning.According to the MeT department, visibility at Palam airport fell below 125 metres in the early hours and continued to impact operations till 10 a.m. Normal operations at the airport were suspended.

“Due to bad weather, flight operations at Delhi Airport are affected, CATIII B compliant aircraft and pilots are currently able to land. Passengers are requested to stay in touch with the airline concerned for updated flight info,” the Delhi Airport said in a statement at 6 a.m. At 8 30 a.m., it said that operations were still being impacted due to weather.

According to private weather forecaster SkyMet weather, the Palam observatory recorded nil visibility at 3 a.m. and it was for the first time this season that the Capital was engulfed in such thick fog.

Cold wave conditions were likely to continue in the Capital that would abate only after a western disturbance brought rain, the MeT department said. The western disturbance is likely to bring a change in the wind direction and bring some respite from one of the coldest spells in the capital since 1997.