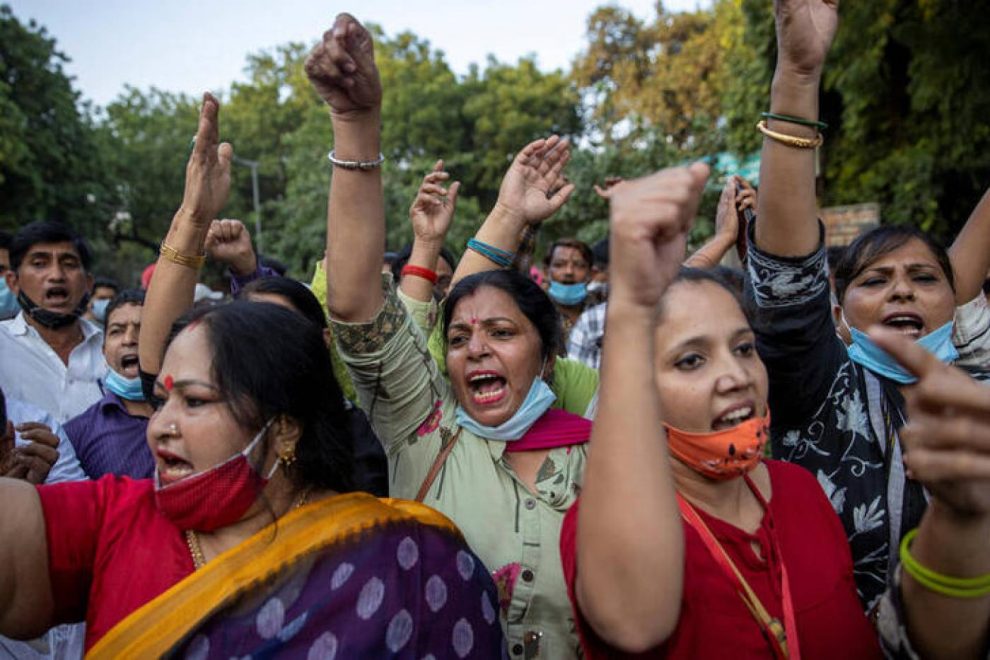 CHENNAI, India: When Priya Periyasamy was elected to lead her village council in southern India a year ago, her parents warned that she would face hostility as a low-caste Dalit woman, but nothing prepared her for the constant abuse she receives.

Periyasamy is among at least 16 women village council leaders in Tamil Nadu state who have filed complaints in the last six months over discrimination for being Dalits – considered India’s lowest caste in an ancient social hierarchy.

“Since I was elected, other members of the council wouldn’t even greet me,” Periyasamy, 24, told the Thomson Reuters Foundation by phone from her village of Mannampandal.

The last straw came when she was lambasted for sitting on a new chair in the council office – prompting Periyasamy to go on strike and stage a sit-in protest to highlight the daily discrimination and insults she faces.

“Initially, I told myself I should focus on learning the job and ignored it. But then the office was being renovated and I decided to replace the old chair with council’s consent. I was abused for sitting on the revolving chair,” she said.

Rights campaigners say her experience is all too common in India, where elected Dalit women face a double discrimination in a country with low rates of female representation despite gender quota laws in village council, or panchayat, elections.

Under the legislation, Indian states reserve at least half of their village council posts for women, including those from lower castes – giving women like Periyasamy a chance of running.

India banned discrimination based on caste in 1955, but a patriarchal mindset and deep social biases still make it difficult for Dalit women to have their voices heard – even if they win elected office, advocates say.

“Not allowing a person of a lower caste to have an identity has got normalised in a deep way,” said Edwin, trustee of the charity Human Rights Advocacy and Research Foundation (HRF), which trains women panchayat leaders on governance issues.

“And for a woman, being poor and from a low caste are multiplying factors that make it impossible for an elected Dalit woman sarpanch (village council president) to work,” added Edwin, who goes by one name.

SITTING ON THE FLOOR

India was one of the first countries to have a female head of state, but more than five decades later there are few women in politics. Those who do run for office often face sexual harassment and character assassinations.

While the panchayat quota laws have led to the election of more than one million female village councillors in the nation of 1.3 billion people, similar proposals for state and federal elections have stalled for two decades.

But even being elected as president of their village councils has not shielded some Dalit women from humiliating treatment – with some forced to sit on the floor during meetings or stopped from unfurling the national flag on Independence Day.

Many are reluctant to confront their fellow councillors about such abuse, but increasing numbers are speaking out – leading to several police investigations and arrests in Tamil Nadu.

“When I was denied a chair and asked to sit on the floor during a meeting, I didn’t say anything … I thought I should focus on the power and water issues of the area,” said S Rajeshwari, council president in the village of Therku Thittai.

“But I’m always abused, not allowed to work, and beyond a point I had to complain,” she said.

Officials from Tamil Nadu’s Rural Development and Panchayati Raj Department did not respond to requests for comment.

At training sessions run by the HRF for newly elected village leaders, Edwin said his first step is often to get the participants to sit on a chair.

“They hesitate and sometimes refuse to sit on a chair because they have been told for years that they can’t. It is ingrained in them and it takes time to tell them otherwise. They learn, but when they go to work, others still discriminate.”

K Krishnaveni, from the rights group Tamil Nadu Untouchability Eradication Front, said the government should do more to prepare women councillors for their new roles and better equip them to stand up to discrimination.

“The battle is uphill and unless the government steps in early to train them properly, they don’t get a chance to perform. Often government-mandated training happens in the fag-end of their five year tenure. By then, it’s too late.”

In Attupakam, another village in Tamil Nadu, V Sasikumar decided to quit his job in a factory to help his 60-year-old mother when she made history by becoming the first Dalit woman to be elected as village council president.

Barred from talking at meetings and stopped from hoisting the flag on Independence Day, she has gone to the Madras High Court to seek protection for her family from higher-caste members of the village council.

“My parents were daily wage earners and my mother has struggled to reach here,” Sasikumar said. “She wants to do her job, but is not being allowed to. We support her, but sometimes it’s heartbreaking.”

In Mannampandal, Periyasamy said she would not give up easily.

“Every day my self-respect takes a beating,” she said. “I thought if I respect the other members, they will learn to respect me also. But now I realise I have to fight and this is just the beginning of a long battle.”

Bolivia’s Tuni glacier is disappearing, and so is the water it supplies
Giant vagina sculpture fuels culture wars in Brazil
Comment