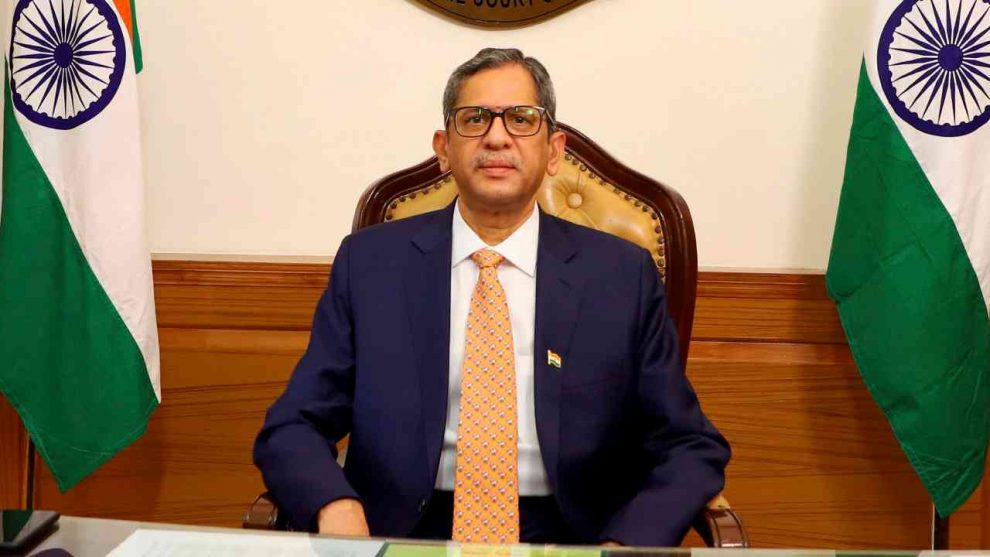 The Dispatch Staff
Add Comment
It is imperative for a healthy democracy that people feel their rights and dignity are recognised and protected, Chief Justice of India N V Ramana said on Saturday, stressing that denial of justice would ultimately lead to anarchy

SRINAGAR: It is imperative for a healthy democracy that people feel their rights and dignity are recognised and protected, Chief Justice of India N V Ramana said on Saturday, stressing that denial of justice would ultimately lead to anarchy.
Addressing a function in Srinagar, the CJI urged lawyers and judges to create a congenial environment for litigants who are often “under a lot of psychological stress”.
He lamented that the justice delivery mechanism in India is very “complex and expensive” and the country is far behind in making courts inclusive and accessible.
“For the functioning of a healthy democracy, it is imperative that the people feel that their rights and dignity are protected and recognised. Expeditious adjudication of disputes is the hallmark of a healthy democracy.
“Denial of justice would ultimately lead to anarchy. Soon the institution of the judiciary would be destabilised as people will look for extrajudicial mechanisms,” the CJI said.
The Chief Justice of India was here to lay the foundation stone of the new complex for the High Court of Jammu and Kashmir and Ladakh.
“Peace shall only prevail when people’s dignity and rights are recognised and protected,” he said.
Chief Justice Ramana said in India, the courts have the constitutional duty of adjudication of rights and upholding the aspirations of the Constitution.
“One of the major challenges to the protection of rule of law and human rights is the inability of the formal justice system to deliver speedy and affordable justice to all. The justice delivery mechanism in India is very complex and expensive,” he said.
He said the judiciary must be at its innovative best to ensure that the challenges to its working are met with just and Constitutional measures.
“Technology has been a strong aid to the judiciary. Now, virtual courts are bridging the gaps of accessibility by reducing time, cost and distance. But in a country like India, where a vast digital divide still exists, much needs to be done in order to harness the full potential of technological innovations,” he added.
The Chief Justice of India expressed happiness after laying the foundation stone of the new high court complex here.
“Solving the problems of infrastructure is very close to my heart. I have consistently emphasised the need for the development and modernisation of infrastructure. Sadly, post-independence, judicial infrastructure has not been overhauled to meet the demands of the growing needs of modern India.
“We are far behind in making our courts inclusive and accessible. If we don’t attend to this urgently, the Constitutional ideal of access to justice would stand defeated,” he said.
He said the district judiciary is the foundation of the judiciary. “Only if the foundation is strong, the entire system can flourish. As I have mentioned earlier, the condition of judicial infrastructure across the country is far from satisfactory. Courts are operating from rented accommodations and under deplorable conditions.”
The chief justice began his over 20-minute speech with a famous verse by poet Ali Jawad Zaidi as he reminisced about his visits to Kashmir earlier.
“Muddaton baad jo aayaa hoon is vaadi mein
Ik naya husn, naya rang nazar aata hai
(I have come to this valley after ages.
I can see a new beauty, new colour).”
The CJI said, “I had the fortune to visit this paradise many times, but every time I have been amazed by its beauty and moved by its hospitality. It’s a land where one gets to experience four seasons.
‘The kindness of the people here, and the enriching culture of Kashmir, transforms every soul that visits this scenic land.”
The chief justice touched on various issues facing the lower judiciary and asked the concerned to take advantage of the 100 percent funding by the central government.
“The other aspect which I keep on highlighting is the need to fill up the vacancies. Twenty-two per cent of the posts in the district judiciary are still lying vacant. Steps have to be initiated immediately to fill this gap.
‘Appropriate steps are also required to be taken for providing security and accommodation for all the Judges,” he added.
Chief Justice Ramana said judges and lawyers must take an oath to work hard to make justice a reality.
“Mere laws are not enough to build tradition in a country. It requires men of indelible character inspired by high ideals to infuse life and spirit in the skeleton of the laws,” he said adding the judges play a very significant role in the Constitutional scheme.
“Common man always considered the judiciary as the ultimate guardian of rights and liberties… Your swift, proactive and sensitive decision can make a lot of difference in the lives of several people who are in desperate need of justice. Create a congenial environment for the litigants. Often, litigants are under a lot of psychological stress,” he said.