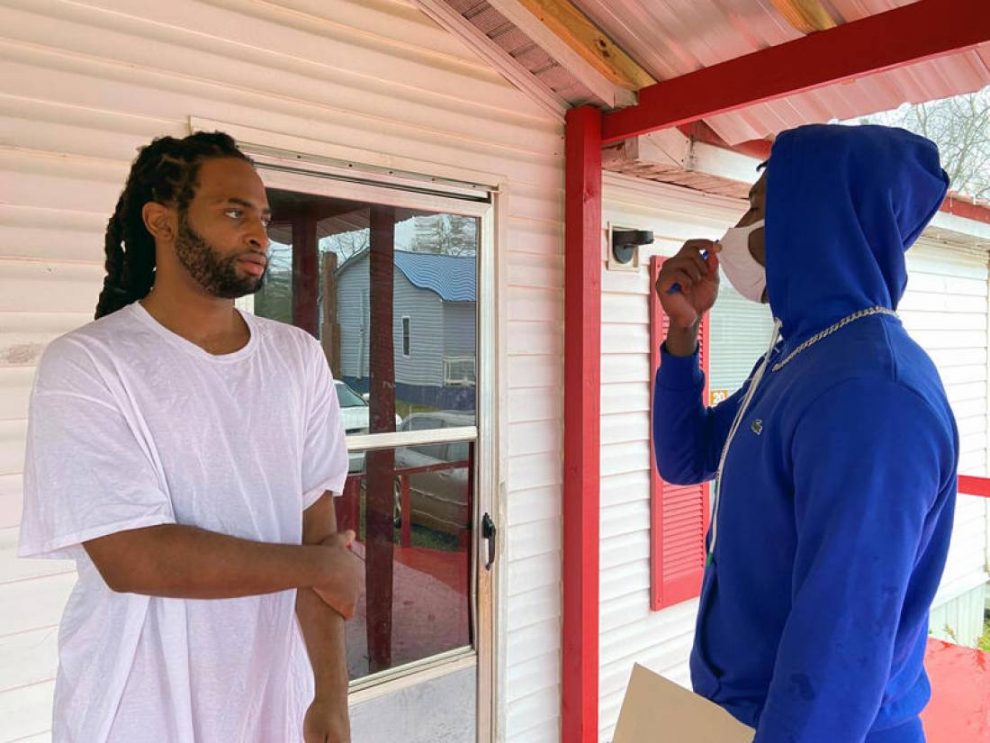 CUTHBERT, Ga.: Three days before Tuesday’s all-important Georgia runoffs for the U.S. Senate, Derrick Gorsuch braved the rain in a pickup truck, scouring poor Black neighborhoods in his rural slice of the state for anyone who needed one last prod to vote.

The 20-year-old canvasser for the Democratic candidates knew how high the stakes were. Victory in the twin races would give the Democrats control of Congress and with it the power to advance or block Democratic President-elect Joe Biden’s ability to govern.

Gorsuch spoke to a young woman in a public housing development who promised to vote, a 32-year-old factory worker who needed to be reminded that Tuesday was his last chance to vote, and an elderly pastor who had already voted but said he would make sure that his wife got to the polls.

But perhaps no door-knock was as important as Mark Peavy, a 44-year-old school cafeteria worker who did not vote in the November general election. Gorsuch repeated his sales pitch of how his ballot could help create a 50-50 split in the Senate, giving Vice President-elect Kamala Harris the tie-breaking vote.

“If you don’t vote for anything we need you to vote for this one,” Gorsuch pleaded outside Peavy’s home in Cuthbert, a small city in Georgia’s ‘Black Belt,’ a region with a high proportion of African Americans across the middle of the state.

The push paid off. Early Wednesday morning, Democratic challenger the Rev. Raphael Warnock unseated Republican U.S. Senator Kelly Loeffler by 50.6% to 49.4%. Filmmaker Jon Ossoff held a narrower 50.2% to 49.8% lead over Senator David Perdue in a race that had not yet been called.

More than 129,000 voters in the runoffs did not vote in the presidential and congressional elections in November, according to state data. The data on voting records published by the state so far does not include ballots cast on Election Day, so the number of new voters could be higher. So far, more than a third of the new voters identified themselves as Black when they registered to vote.

The canvassing in Cuthbert – the seat of Randolph County in southwest Georgia – highlighted a broader Democratic strategy to tap into overlooked rural Black voters, the natural extension of a years-long effort by Abrams and others to register people of color that were critical to Biden’s victory over President Donald Trump. Black Voters Matter, whose efforts included 10 heavily Black counties in the southwest region of the state, had planted a sign outside Peavy’s home.

Biden captured nearly 9 in 10 Black voters in November, according to exit polls from the Edison Research firm, reflecting an enduring support among African Americans that stems in part from the belief that Democratic party policies are more aligned with the needs of minorities and the working class.

While Gorsuch made the rounds in Cuthbert he stressed that Democrats would invest in expanded access to healthcare and in public education. One voter noted Ossoff’s recent visit to Cuthbert, where he highlighted the closure of a hospital, as evidence the party had the community’s interests at heart.

Bobby Jenkins, the Democratic chair for Randolph County, said the canvassing effort went into overdrive last month, ushering in a “Christmas miracle” that allowed him to hire 15 canvassers for Randolph and two neighboring counties.

Fair Fight, a voting rights group co-founded by Abrams, had pitched in $20,000, Jenkins said, while wealthy out-of-state donors sent several thousand dollars after discovering that Randolph voted 54% for Biden, although it is 60% Black.

Randolph delivered a handful more votes for Warnock and Ossoff than it did for Biden in November, even though overall turnout was lower, as expected in a runoff.

The work in Cuthbert dovetailed with that of Faith in Public Life, a network of Black rural churches that spent the past several weeks following up on voter pledges and ensuring people had rides to the polls.

Shavonne Williams, the group’s organizing leader in Georgia, said they have been finding congregants in their 50s and 60s who never voted before.

“We spread out from Augusta and hit all the rural counties,” she said. “Many didn’t want to be political, or they thought it didn’t make a difference. We educate and encourage. We remind them that Jesus got involved. That seems to get through.”

If the strategy in rural Georgia was about realizing untapped potential, the work in and around Atlanta since November was aimed at building on the coalition of Black and college-educated white voters that proved decisive in Biden’s win.

Much of that success could be traced to the network built by Abrams, who rose to prominence after narrowly losing to Brian Kemp in her 2018 bid to become Georgia’s governor.

Boosted by an influx of cash from labor unions, Fair Fight raised $22.5 million between Nov. 24 and Dec. 16, giving it considerable financial power for the runoffs.

The New Georgia Project, founded by Abrams in 2014 to increase voter registration, deployed 5,000 volunteers and staff since August to knock on 2 million doors, according to Nse Ufot, the group’s chief executive officer.

“The nation is realizing what we have known all along: Georgia is a battleground state,” Ufot wrote on Twitter.

The World This Week: Disorderly transition in the US, Breakthrough over Qatar, Enrichment in Iran and Arrests in Hong Kong
Nation of small-business owners adapts to England lockdown No 3
Comment