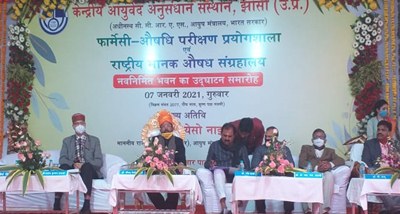 AYUSH minister Shripad Yesso Naik has said, the demand for AYUSH products has increased three-fold during the coronavirus pandemic. The Minister said, Amid the Covid-19 crisis, our ayurvedic medicines have been used in as many as 100 countries as an immunity booster and is slowly gaining momentum across the world. He was speaking at the inaugural function of two new departments of Central Ayurveda Research Institute in Jhansi.

The two buildings inaugurated by the Minister have been built under an estimated budget of 14 crore rupees, and as per the guidelines of World Health Organization (WHO). AIR correspondent reports, these departments house a national raw drug repository, a pharmacy and a drug testing laboratory which will also help in employment generation in Bundelkhand region of state which is full of medicinal plants.

A first of its kind in the country, the repository will have 500 varieties of medicinal plant samples to be used for research purposes. Similarly, the pharmacy department will be used for advanced research of new variants of ayurvedic medicines which can be lab tested and undergo clinical trials here itself.

The research done in the institute will be further shared across the country in order to promote ayurvedic medicines. OPD at the institute would soon start functioning here. On the occasion Union AYUSH minister Shripad Yasso Naik said that during COVID pandemic AYUSH medicines became very popular.