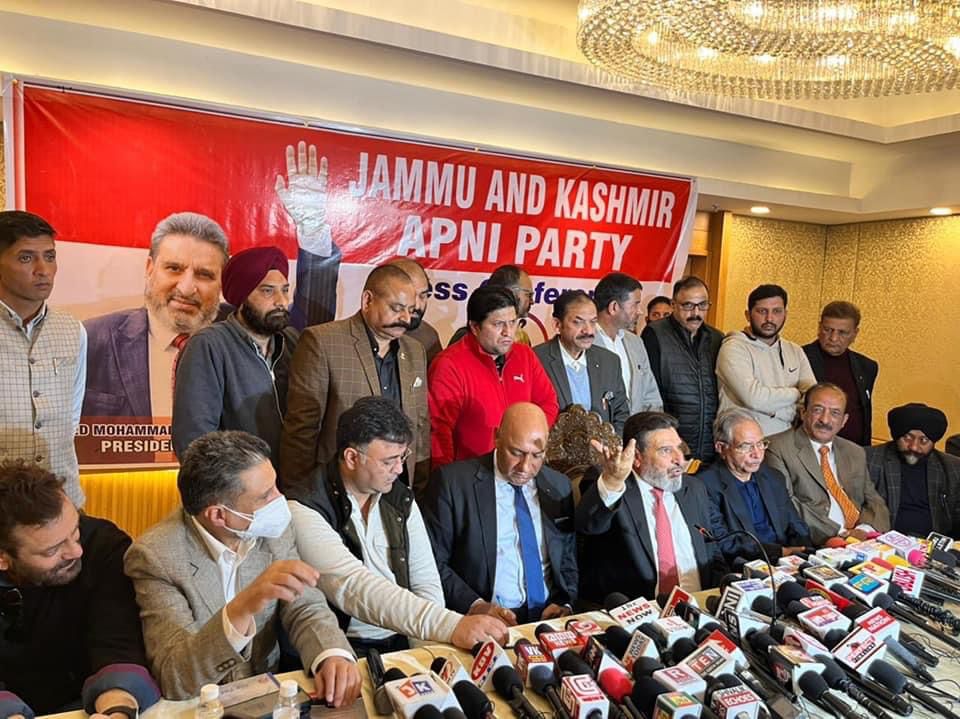 JAMMU: Calling the Delimitation Commission’s draft report as the implementation of Dixon Plan aimed to divide people on communal lines, President, J&K Apni Party Syed Mohammed Altaf Bukhari has rejected the report as it has deeply disappointed all sections of society in both the regions of J&K.

Altaf Bukhari also questioned five MPs of J&K in the Parliament for their silence which shows that they have failed to represent the sentiments and aspirants of the people.

“These MPs should resign from the Parliament for their inability to represent the people of J&K. It shows that they represented their political parties but not the people,” he said.

Bukhari was addressing a press conference here in Jammu. He was flanked by senior party leaders.

Bukhari said that the Delimitation Commission did no ground exercise and implemented the plan without consulting the people and their representatives in different constituencies with a motive to divide people on communal lines but people have not fallen prey to their plan.

“The merging of Anantnag Lok Sabha Constituency with Rajouri and Poonch is an example of gross injustice with the people,”.

Referring to the illogical Delimitation of Karnah Assembly segment, he said “Whether the voters will use flying taxis to cast their votes in constituencies which were created ignoring geographical difficulties and long distances? These areas often remain cut off for six months. How do the people of one area approach their representative? Is it possible?”

Condemning the merging of Suchetgarh constituency with RS Pura, he said that national security was compromised and the political ambition of a political party was preferred which is a cause of serious concern.

He further said that it may surprise but the fact is that the Commission members while sitting in Pahalgam completed their report concerning 12 constituencies within a single day without doing any kind of ground exercise.

He condemned the draft report of the Delimitation Commission calling it injustice with the vast majority in J&K.

Expressing his concern over the treatment with the BSF, CISF aspirants and 60, 000 daily wager’s unaddressed regularization issues, he said that the assurances made by the Govt must be fulfilled as soon as possible and the daily wagers deserve to be regularized.

“By ignoring the youth and pushing them to the wall, creates a situation when they become drug addicts and motivate towards terrorism. The Govt should seriously address the growing unemployment issue,” he added.

He said that “The local bureaucrats of J&K are not being given postings. If they are given postings, they can be able to address the issues of the people. However, the command to run the Govt Depts is given in the hands of non bureaucrats mostly”

“The local Govt officials are sidelined. Besides, there is disappointment and frustration among the businessmen, locals, unemployed youth and it may add to problems. However, the Govt is not concerned about the growing concerns of the people in both of J&K,” he said.

In absence of local officials in the Govt, he said that the corruption level has crossed all limits in J&K and public issues are not being heeded giving rise to the feeling of alienation with the Govt.

He said that “No one else has given sacrifices in the country than the people of J&K for the nation.

“We will reserve the rights of the local population on the resources and no outsider will be allowed on these resources”.

He said that demanded one-time settlement of electricity charges in favour of the people and the business establishments keeping in view the financial situation due to prevalent covid19 situation.

He, however, praised the health department, doctors, and paramedical staff members for their efforts in containing the spread of the virus in J&K during the third wave.

When the COVID-19 restrictions are almost lifted from across J&K, he said that the Jama Masjid Srinagar be opened for the worshipers.

Strongly opposing the discontinuation of the Displaced Person’s package, he said that the Govt must rethink the demand of the DPs and release the stopped package amount in favour of the DPs.

“These DPs are living in a poor financial condition and hence, their demand for the release of the pending package amount is genuine as it was sanctioned by the previous Govt of India. These families should not be put to further harassment and the stopped amount of packages be released,” he added.

He also referred to the resentment among the Jatt Community in Jammu as they have been sidelined concerning their representation following the merger of Suchetgarh with another constituency.

He also demanded that the press and media members should be given the freedom to report without restrictions.

Regarding poor management in hospitals especially in Govt Gandhi Nagar Hospital in Jammu District, he said that the authorities should lift the dual control over the health institution and help the poor to get facilities under one floor as they are being harassed for one reason or the other concerning their medical tests.