Home India-Subcontinent Delhites, The Polluted Air is Apparently Reducing Your Life by 10.2 Years

A new tool launched by The University of Chicago, called Air Quality Life Index, revealed that exposure to the perpetual unclean air of Delhi will cost its residents 10.2 years of their lives.

The Air Quality Life Index, or AQLI, quanitifies air quality data as the numbers of years lost to air pollution.

AQLI is particularly insightful as a peer-reviewed research found that 10 μg per cubic meter of particulate matter pollution leads to 0.6 years of decrease in lifespan.

On an average, Indians will lose 4.3 years of their lives due to air pollution.

Unsurprisingly, the capital city tops the list, experienceing the most dire consequences of breathing in the unclean air. Bringing the quality of the air under WHO’s limits, which stands at around 100, will save a decade of life for the residents of Delhi.

However, this doesn’t mean that 10.2 years will be deducted from the future old age. Instead, this 10-year period means that people will experience worsened respiratory and cardiac health, amongst other diseases.

The decrease in the years will either be directly due to particulate pollution or worsening of the existing conditions that will lead to unrelated death or disability.

The months of October and November recorded the worst quality of air in the national capital in 2018. Crop burning in Punjab and Haryana, vehicular and industrial emissions, and bursting crackers added to the already poor quality of air. The air quality meter around the city stopped working after PM 2.5 hit a meter reading of more than 999.

Earlier, in October, Reuters, to bring a stark image of the situtation, had set up its cameras on top of its Delhi Bureau. This was what that was recorded: 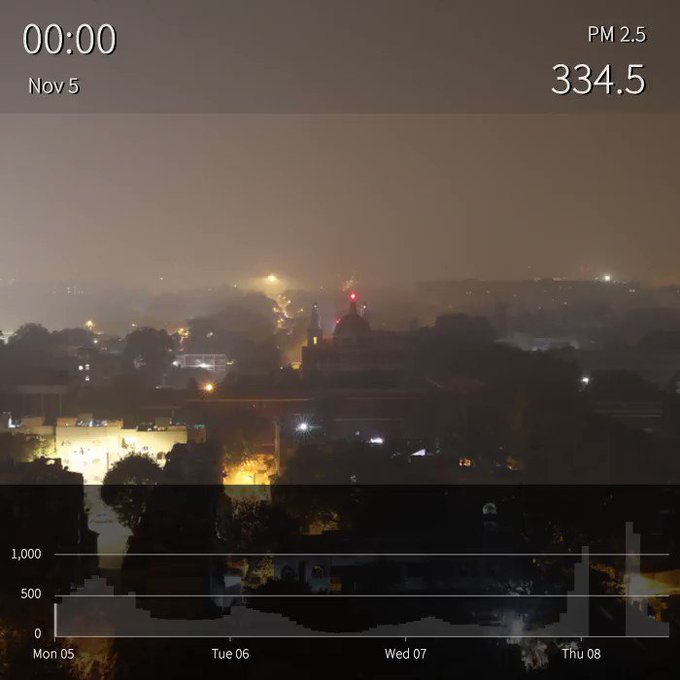 For our latest piece, we installed a camera in Central Delhi to show what pollution in the city looks like. I think I am totally in love with the idea of combining photos and data. #DelhiPollution #Pollution @ReutersGraphics https://graphics.reuters.com/INDIA-POLLUTION/01008173281/index.html …

Chronic air pollution and a long-term exposure to PM 2.5 particulate matter has been linked to cerebrovascular and neurodegenerative diseases like Alzheimer’s. All of the damages that the poor air quality has imparted will keep compounding for every year that a person has lived in Delhi.

Unless the government and the citizens get serious about the polluted air, the future of Delhi will end up in a dark and hazy smog.