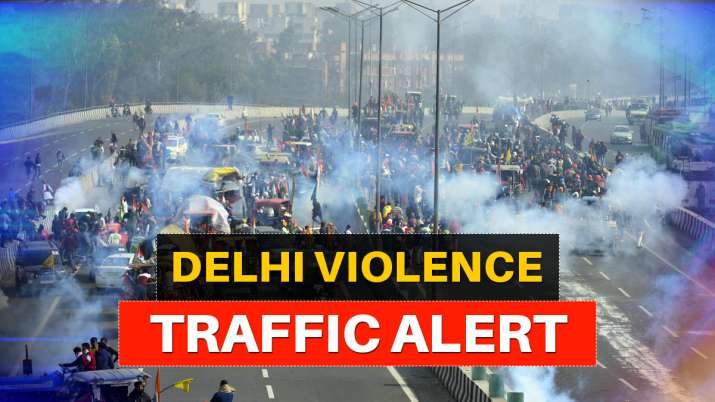 DMRC announced on Wednesday that entry and exit to Lal Quila metro station and entry at Jama Masjid metro station have been closed.

Delhi Traffic Police on Wednesday issued an advisory after traffic was affected in several parts of the national capital following the violence which broke out yesterday during the farmers’ tractor rally.

The Delhi Traffic Police took to Twitter to provide the information.

“Ghazipur Mandi, NH-9 and NH-24 have been closed for traffic movement. People commuting from Delhi to Ghaziabad are advised to take Shahdara, Karkari Mor and DND,” Delhi Traffic Police said.

The Delhi Metro Rail Corporation (DMRC) announced on Wednesday that entry and exit to Lal Quila metro station and entry at Jama Masjid metro station have been closed.

Meanwhile, heavy security has been deployed near the Red Fort where a group of protestors entered the fort and unfurled their flags from its ramparts yesterday.

Farmers broke barricades to enter Delhi and indulged in vandalism across several parts of the national capital during their Kisan tractor rally organised to protest against the Centre’s three new farm laws.

83 police personnel were injured, with several public and private properties being damaged in acts of vandalism by the rioting mob, said the Delhi Police in a release.

As per Delhi Police sources, at least 15 FIRs have been registered in connection with the violence during farmers’ tractor rally yesterday.