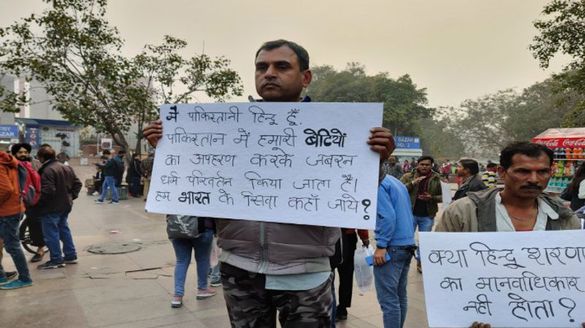 Members of the Hindu community from Pakistan, who fled religious persecution from the neighbouring country and came to India, held a peaceful march here in support of the Citizenship (Amendment) Act (CAA).The members urged the government to accord citizenship to the persecuted families and appealed to opposition parties to stop opposing the new law.

Another migrant, S Tara Chand, echoed similar sentiments and said that persecuted Hindu families who came to India are not infiltrators.”We are not infiltrators. We legally entered India with a visa and passport. The opposition parties are annoyed with us. We have come here, where else will we go? Opposition parties are saying don’t give citizenship to us. I appeal to them not to oppose this and give us citizenship at the earliest,” he said.

Protests have erupted in several parts of the country over CAA, which grants citizenship to Hindus, Sikhs, Jains, Parsis, Buddhists, and Christians fleeing religious persecution from Pakistan, Afghanistan, and Bangladesh who came to India on or before December 31, 2014.

In some parts, Section-144 has been imposed as a precautionary measure in view of the prevailing law and order situation.