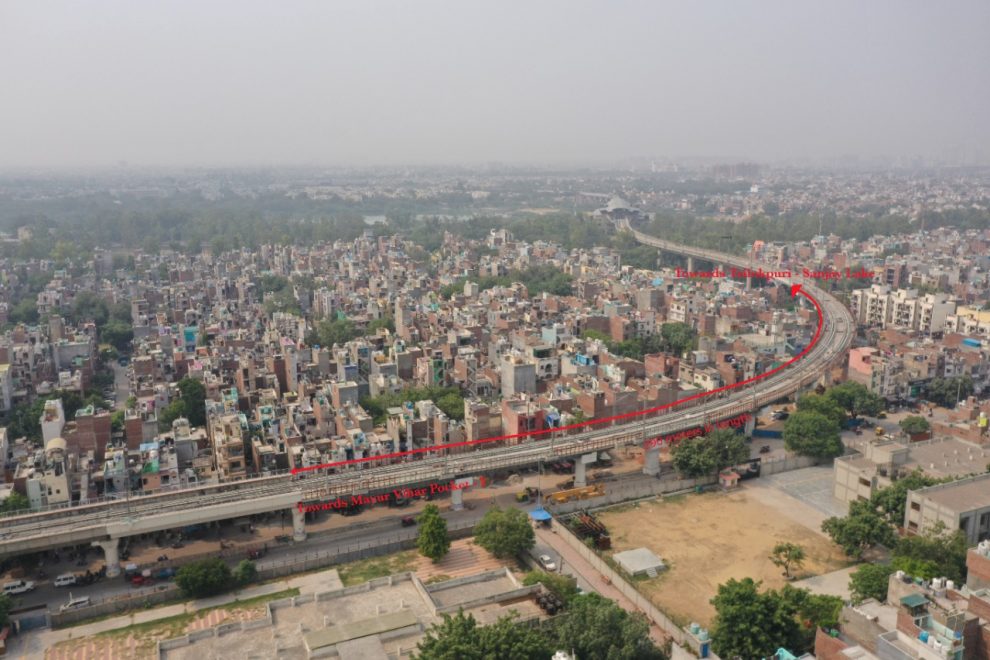 To expedite work on the Trilokpuri section of Pink Line, the Delhi Metro adopted a unique construction method by using steel girders instead of the conventional concrete ones.

Construction of concrete girders would have required the establishment of a casting yard and it would not have been feasible to set up a casting yard for such a small stretch within a short duration of time. Therefore, steel girders were installed on this stretch.

The length of these girders varies from 16 to 38 metres. The height of the viaduct stands at about 8 to 9.5 metres. A curved span of radius 200 metres is also a part of this stretch. Earlier, for the construction of the Chhattarpur Metro station also, DMRC had adopted a similar method of using steel structures because the construction of that station was also delayed due to land acquisition issues.

The work on installing these steel girders and casting of deck slab was completed in April just before the second surge of the Covid pandemic. This was a significant achievement because the civil construction on this stretch was started in early 2020 and was repeatedly hampered by the pandemic induced lockdowns and issues such as non-availability of workforce. Now, track laying and other ancillary works have commenced on this stretch between Mayur Vihar Pocket – 1 and Trilokpuri Sanjay Lake following the completion of civil work. In addition, Overhead Electrification work is also under progress.

The track laying work is expected to be completed by the end of June.  Preliminary trials are expected to start thereafter. All efforts are being made to further expedite the progress of work on this particular stretch. The section shall be operational immediately after receiving the mandatory clearances from all concerned authorities.

This corridor will further be extended from Majlis Park to Maujpur in Phase – IV, making it the longest single Metro corridor in India at approximately 70 kilometers. After completion of the Phase – IV, the Pink Line will also become the only Ring Corridor of Metro in the country.

DMRC is also developing an internal road below the viaduct at Trilokpuri which will connect the Vasundhara Road and Trilokpuri Road. The road will be 140 metres in length. This will help in decongesting the area and will ease the traffic scenario.

While the presently operational sections of the Pink Line were made functional in 2019, this small stretch got delayed due to the unavailability of encumbrance free land. After following the due process of law, the land was acquired and R&R (Rehabilitation and Resettlement) of Project Affected Persons was done for commencement and completion of construction work.