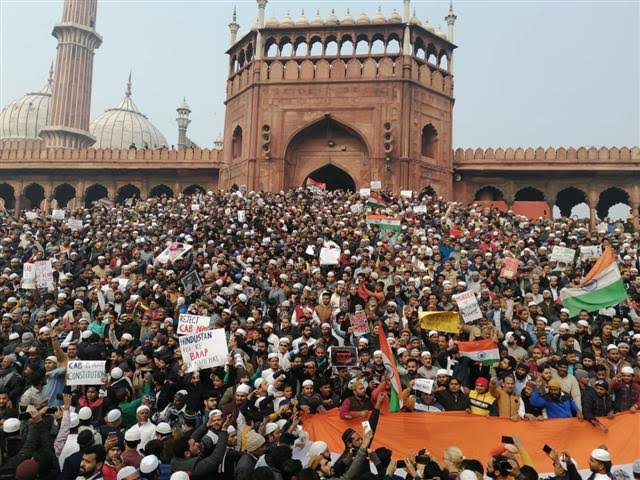 A large mass of people turned up in Jama Masjid area of Old Delhi here on Friday in a major protest against the Citizenship (Amendment) Act, 2019 and raised slogan denouncing the newly-enacted law.
Protestors carried posters of nationalist leaders like Mahatma Gandhi and BR Ambedkar at the rally and demanded that the new law be withdrawn. Slogans of “Aazadi” and “Tanashahi Nahi Chalegi” were raised by the protestors. Bhim Army chief Chandrashekhar Azad was also seen at the protest leading his supporters in a protest at the historic mosque. Delhi Police had earlier denied permission to Azad’s protest march from Jama Masjid to Jantar Mantar.
Delhi Police Public Relations Officer (PRO) MS Randhawa is also present at the spot to oversee the situation and is asking people gathered at Jama Masjid to peacefully disperse.
According to police, the situation is being monitored using drones.
The protestors amassed at the masjid complex and across the nearby roads.
Protests have been held at different places in the national capital ever since the Parliament passed the Citizenship (Amendment) Act, 2019, and it got assent from the President becoming a law.
This comes amid widespread protests across the country against the newly-enacted citizenship law, which grants Indian citizenship to refugees from Hindu, Christian, Sikh, Buddhist and Parsi communities fleeing religious persecution from Pakistan, Afghanistan, and Bangladesh, who entered India on or before December 31, 2014.ani