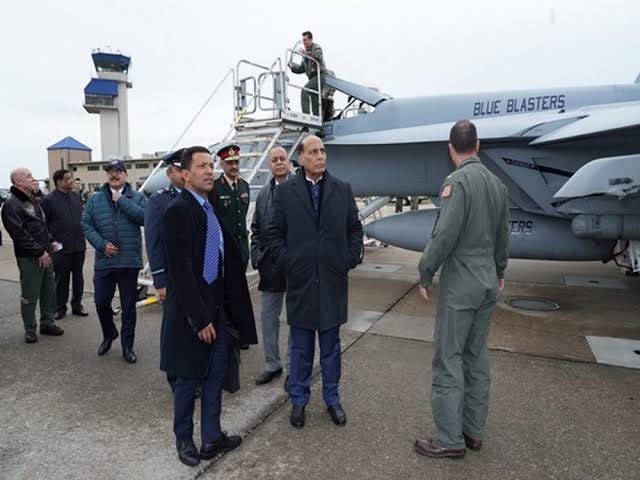 Ahead of India-US 2+2 Ministerial dialogue, Defence Minister Rajnath Singh on Tuesday visited the largest US naval base in the world, during his visit to the country.
The visit to Naval Station Norfolk highlighted the depth of the US-India defence partnership and the close ties between the Navies of the two countries. This comes ahead of Wednesday’s second India-US 2+2 Ministerial dialogue in Washington for a comprehensive review of cross-cutting foreign policy on salient regional and global issues.
Defence Minister said his visit reflected the strong defence ties between India and the United States and hoped that the relations will further strengthen in the near future.
US officials said the Indian delegations’ visit to Naval Air Station Oceana and onboard USS Dwight D. Eisenhower will further bolster partnerships between the two countries.
Rajnath also paid a visit to Naval Air Station (NAS) Oceana, where he inspected a Boeing Mobile Flight Simulator, static display, and F/A-18E flight demonstration. The Indian delegation also toured the Nimitz-class aircraft carrier USS Dwight D. Eisenhower (CVN 69), which is located at Naval Station Norfolk.
India and the United States continue to build defence cooperation ties through military exercises, defence trade and official visits and exchanges, including this visit to the largest US naval base in the world.