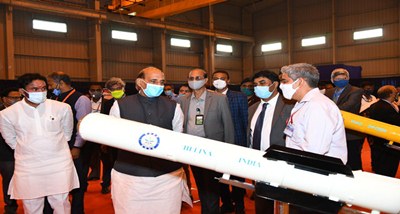 According to a defence release, this will simulate Mach 5 to 12. Mach represent the multiplication factor to the speed of sound, making India the third country after the US and Russia to have such a facility.

With this India has become the third country to have such a huge facility in size and capability after America and Russia. The project is an indigenous development and an outcome of synergistic partnership with Indian industries. Defence Minister visited Dr APJ Abdul Kalam Missile Complex of the Defence Research Development Organisation during his two day visit to Hyderabad and asked the DRDO scientists to Make India a Super Military Power.

He appreciated the contributions of the DRDO Young Scientists Lab and emphasised the need for focussing on next generation needs to address challenges like cyber security, space and artificial intelligence. Union Minister of State for Home G Kishan Reddy and DRDO Chairman G Satheesh Reddy accompanied Raksha Mantri during the visit.