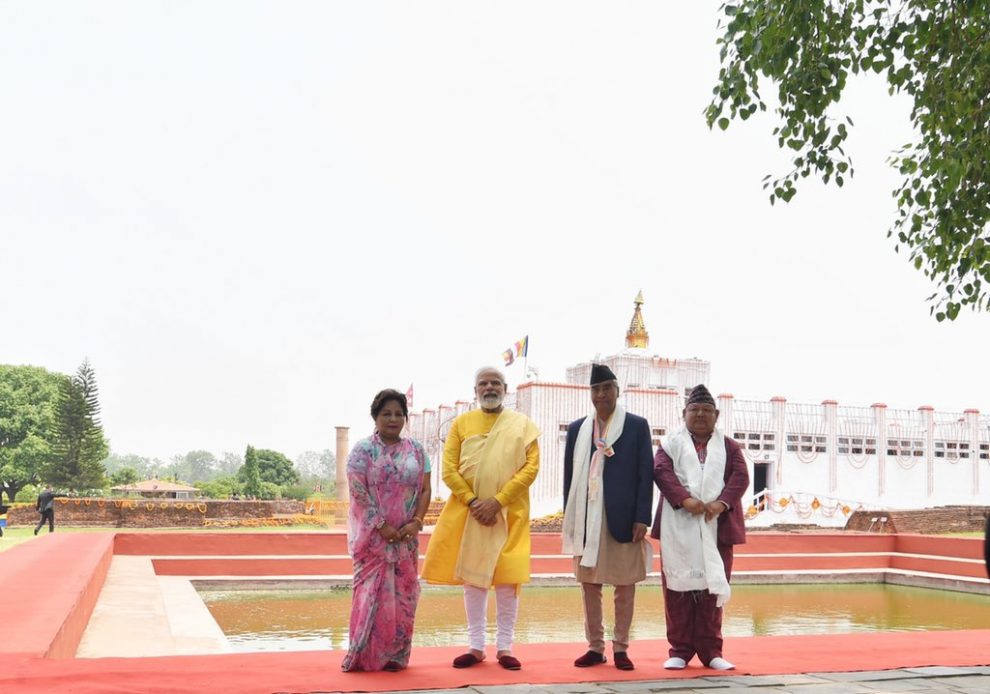 Prime Minister Narendra Modi was in Lumbini, the birth place of Lord Buddha in Nepal, on a day-long visit to lay the foundation of the India International Centre for Buddhist Culture and Heritage. The proposed centre will cost Rs.1 billion and will take three years to complete. The occasion was the auspicious day of the Buddha Jayanti on 16th May. The visit got associated with usual signing of MoUs and reiteration of Indian-Nepal ties, punctuated by the diplomatic niceties and hyperboles. The moot point is, however, whether India can leverage the historic religious and cultural affinity with Nepal for geopolitics.

However, the point to note here is that Nepal is double-dealing with India as well as China for its benefit, whereas both New Delhi and Beijing are competing for leadership space in South Asia, mainly in Kathmandu. India’s new initiative in Lumbini in a sense is aimed at curtailing Chinese preponderance of patronage of Buddhist festivals and institutions.

In his speech, Modi invoked the historic ties between India and Nepal and made some evocative remarks. Sample these, “India-Nepal relations are unshakeable like Himalayas”. Second, India-Nepal ties under the shared principles of Buddhism will benefit the entire humanity. Third, and more emotional for peoples of Nepal and India, “I had said in Janakpur that our Lord Ram is incomplete without Nepal. Today, construction of Ram temple will make the people of Nepal happy”.

Modi’s visits and prayers in the temples, mainly the famous Maya Devi Temple generated a great deal of goodwill. Modi himself was spiritually heavily delighted, “I feel blessed to have prayed at the Maya Devi Temple on Buddha Purnima”.

Six MoUs and Agreements were signed. These mostly relate to educational exchange. Three are between Indian Council for Cultural Relations (ICCR) and Nepal Universities, two between IIT, Madras and Kathmandu University and one between Satluj Jal Vidyut Nigam (SJVN) Limited and Nepal Electricity Authority. The MoUs with ICCR with between Lumbini Buddhist University to establish a Dr Ambedkar Chair in the latter; the Centre for Nepal and Asian Studies, (CNAS), Tribhuvan University for establishment of an ICCR Chair of Indian Studies and likewise chair with Kathmandu University.

The fourth MoU related to a general collaboration between IIT, Madras and Kathmandu University. Following that, the fourth Letter of Agreement (LoA) between IIT, Madras and Kathmandu University for joint degree programme at masters level and the final Development Project Agreement was between SJVN Ltd and Nepal Electricity Authority (NEA) for development and implementation of Arun-4 Project. This project is a hydropower project on river Arun. SJVN has a portfolio of three projects in Nepal of 2059 MW capacity, the mission is to generate 25000 MW by 2030 and 50000 MW by 2040.

The Lumbini visit was Prime Minister’s fifth visit to Nepal since he began to head Government of India in 2014. The visit followed Sher Bahadur’s visit to India in April this year. Recall that Nepal had a change in July last year, of parties in government. The preceding government headed by KPS Oli had created a few cracks, mainly in Kala Pani, in the bilateralism between two countries.

Until the aggressive advent of China into South Asia, India had healthy relationships with all South Asian countries except perhaps Pakistan. India-Nepal ties were smoothly conducted under the special relationship enshrined in the Treaty of Peace and Friendship signed in 1950. The current visit could be inferred to leverage religious and cultural diplomacy to emphasise the special relationship. Whether it will revive the economic and geo-political bonhomie, is a matter of speculation.

Evidently, cultural diplomacy can contribute to growth of trade, economic and geo-political relations. The question is how countries like India, with rich heritage of culture and civilisation, could use this soft power to bear upon strategic and economic relations. India has quite a role in delivering hydro power projects and those on transportation, infrastructure and connectivity in Nepal. Arguably, New Delhi has, in the past, misread the interface between politics and economy in its foreign policy. Now, it is expected, in the wake of the Lumbini visit, that New Delhi uses the complementarity between cultural diplomacy and foreign policy.

Let us note that New Delhi has not leveraged its huge religious and cultural influence in the entire South East Asia for enhancing bilateral relations. To have a glimpse of India’s historical-cultural footprints in South-East Asia, Angkor Wat is the largest religious monument in the world. It was initially a temple of Lord Vishnu gradually converting into a Buddhist temple.

In the third century BCE Hindu priests and Buddhist monks accompanied mercantile class and assumed a leading role in spreading the message of Indian thoughts and culture to the entire South-East Asian region. Angkor Wat, Pagan and  Borobudur, resembling the carvings of Konark temple in Odisha, display the deep penetration of Indian culture. The Indian epic Ramayana is used in Malaysia as Serirama and as Ramker (Ramayana Khmer) in Cambodia.

The Indian cultural influence got diluted and submerged with the conversion of South-East Asians into Islam. Yet, there are several religious monuments, practices and symbolic structures still maintained in South-East Asia. The Muslim majority Indonesia named its Airline as Garuda, the vehicle used by Lord Vishnu. The puppet dance, a particular folk dance form in Odisha, is still practiced in Indonesia.

Despite the above rich heritage, New Delhi has not had deep economic and trade relations with well-off South-East Asian countries until it signed the India-ASEAN Free Trade Agreement in 2009. This proves the point that cultural diplomacy has been downplayed in India’s economic and foreign policy.

In Lumbini visit, this fault-line should be corrected. India has deep and wide religious and cultural links with Nepal. Both are only two majority Hindu countries in the world. In fact, Nepal was officially a Hindu kingdom until 2015 when its new Constitution made it secular like India has been. Understandably, the economic growth and trade potentials are the current measure of strength of a country.

But cultural ties between countries can provide a conducive context for improving the trade and economy. This hypothesis is to be tested after the Lumbini visit of the Prime Minister.