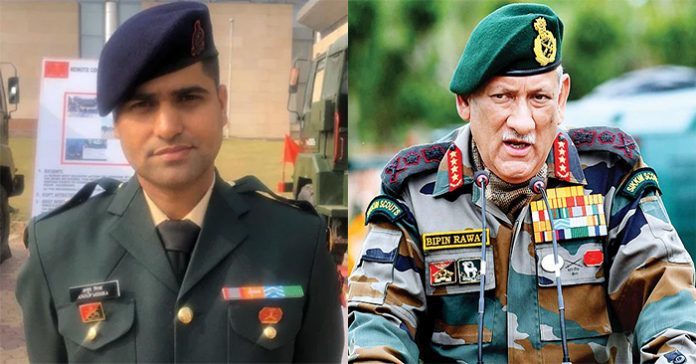 In 2014, Maj. Anoop Mishra was hit by a bullet while serving in Kashmir valley. Luckily, the bullet hit his armour plate but he went through deep trauma following which he decided to work on developing an armour that can withstand hits from all kinds of ammunition.

On Monday, he was felicitated by Army chief Gen. Bipin Rawat with the Army Design Bureau (ADB) excellence award for indigenously developing Sarvatra bulletproof jacket that can provide protection against various ammunition including that of sniper rifles.

Maj. Mishra is presently posted as Instructor at the College of Military Engineering, Pune. He was among the four awardees felicitated by Gen. Rawat.The project was sanctioned in June 2017 and initially the design and development of a Level IIIA soft body armour suit was sanctioned and was subsequently revised to include a Level IV hard armour panel inserts, an officer explained. “The suit was named Sarvatra Kawach, it provides protection from neck to ankle and upper arms,” he said.

Addressing the seminar held by the ADB on “Technologies for Non Contact Warfare”, Gen. Rawat called on the industry to develop dual-use technologies. “A large number of equipment has now been changed to commercial specifications so that what is built by the industry if it is not ordered by the military and the orders are sinking they can go for civil use.”

Giving examples, he said tyres used in the Army vehicles are of military specifications and different from those used by civil vehicles. And so is the case with batteries and generators.

The ADB was set up to liaise with the industry and the academia and develop indigenous solutions for the Army which saw some progress in the last couple of years. Gen. Rawat stressed on the growing importance of non-contact in future wars and flagged cyber, space and Artificial Intelligence (AI) as the focus areas.

In line with this was technology on display by a team from the Military College Of Electronics and Mechanical Engineering (MCME), Secunderabad on the use of the AI for carrying out predictive maintenance of helicopter engines which is under development.

Col. Kuldeep Yadav, who is working on the project, said it is an AI-based software which takes in sensor data and predicts the remaining life of a helicopter engine, aids in predicting failures of an engine and helps in scheduling maintenance before failure of a part. It is a proof of concept and Boeing to an extent has been doing it saving almost 35% costs, he said. “The AI-based model trains on old data and predicts life of an engine based on its data fed after having learnt from the training data set.”

The Defence Research and Development Organisation also put up a few technologies under development one of which was a Laser Ordnance Disposal System (LORDS) which uses high-energy laser beams to destroy far away ordnance.