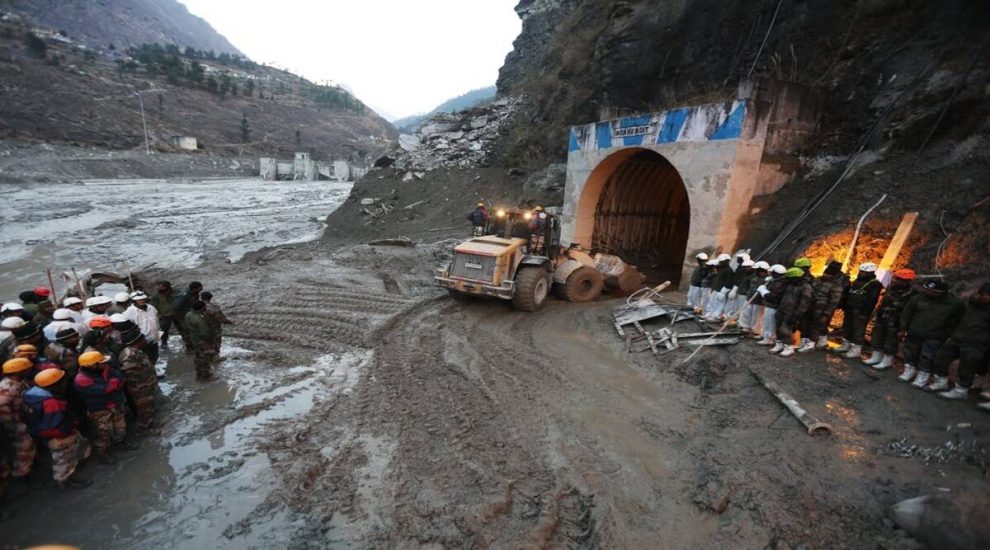 It was a tragedy waiting to strike, of anger and anguish, despair and desperation, morbidity and mortality. Words fail one once again as India was rocked by a glacier burst in Uttarakhand’s Chamoli district Tapovan-Reni area which have left a trail of death and destruction, whereby over 200 are feared missing, 11 bodies have been recovered so far and many still stuck, houses damaged resulting in  massive flooding in Dhauliganga and Alaknanda rivers. While some feel it’s God’s way of course correction many blame the Government.

As villagers grapple with the calamity our netas cursorily wentthrough the ritual political circus preoccupied as they are with the continuing Government-farmer logjam, Opposition tearing into the Centre’s handling of the situation in Parliament and the BJP dubbing criticism as international conspiracy.

All lament the deaths. Prime Minister Modi keeps track, Home Minister Shah reviews the situation regularly, Opposition leaders parrot grief and vouch to help people, and State Chief Minister Rawat announces ex-gratia of Rs 4 lakhs to kin of those who lost their lives. The Government sets up a crisis management team. Rations are air dropped.  Everyone is satisfied that they have done their bit, while the military, Air Force, NDRF and ITBP carry out rescue operations.

Raising a moot point: Does anyone really care?  Given that cloudbursts, landslides and flash floods are an annual affair in Uttarakhand and other hill States wherein thousands die, lakhs are rendered homeless and property worth crores is lost. Why does the Government only react after people have lost their lives?

Shockingly, most leaders are unaware that the Himalayan area is the least monitored region which only underscores how vulnerable we could be.  So why can’t the powers-that-be implement basic suggestions? Why do they not develop a long-term response to cloud-bursts, earthquakes and floods, which are annual predictable crisises?

Moreover, why do politicians feel that merely sanctioning monies will solve the problem? Little do they realize that, neither the Central Disaster Management Authority nor the State Disaster Boards implement any project properly. Millions of words have been written and millions more will continue to be written. But it’s like water off a duck’s back.

Think last year a PIL against the Rishi Ganga (Tapovan Hydro-Electric Power Dam) power project was filed in the Uttarakhand High Court alleging unfair and environmentally hazardous practices by the private firm involved in the project which had damaged the sensitive areas around the Nanda Devi Biosphere Reserve and Valley of Flowers but the authorities exonerated the firm.

Worse, it is a tell-tale of total apathy of an insensitive Administration under various State Governments that did not spare even ecologically sensitive zones to satiate their greed thereby making them more vulnerable to climate change. Of rulers who ignore experts who in turn, blame it on lessons not learnt by successive Administrations, given Uttarakhand’s history of natural disasters.

In 2013 the State was rocked by devastating flash floods in Kedarnath which left a trail of death and destruction, over 5000 feared dead with scores of bodies strewn across the 40,000 sq km affected area and the temple town in ruins.

In 1999 an earthquake hit Chamoli resulting in landslides and changes in the water flow. A year earlier Pithoragarh’s Malpa village was wiped out in a landslide killing 300 with resultant debris blocking the Sharda river and in 1991 an earthquake killed over 1000 people alongside abnormal rise in temperature, reoccurring landslides, cloud bursts and flash floods in vast regions of Tehri, Pauri, Chamoli, Uttarkashi and Almora. Yet nobody paid heed.

Add to it the mismatch between the haste in commissioning projects in the ecologically fragile zone has rung alarm bells among glaciologists as there is every chance such incidents will only become more common in the Himalayas. Given that it occurred in winter, it would signal that global warming was a major contributing factor as winters in the northwest Himalaya have been getting warmer and wetter in the last 25 years according to scientists from the Snow and Avalanche Study Establishment (SASE) Chandigarh. A view echoed by Bengaluru’s Divecha Centre for Climate Change as average temperature had risen by 0.66º C since 1991 – an increase much higher than the global average.

In fact, scientists accuse the Government of transforming the whole region into a resource frontier devoid of any ecological value, treating it as a barren wilderness that could be the source of supposedly low-carbon energy. Discounting that infrastructure and power projects affect the region first when they are constructed — and then when they come in the way of powerful natural forces. Plainly, high-velocity flows turn into disasters when they have to mediate with the built-environment present in the way.

Pertinently, a major post-2013 consensus was to insist on appropriate land-use planning and watershed management practices for the Uttarakhand Himalaya and to adopt ‘best practice’ norms for constructional projects — both to minimise damage to ecosystems. But State and Central administrators chose to throw caution to the winds and grant approvals to dozens of hydroelectric projects unsuited to a terrain that is already vulnerable to unpredictable natural hazards.

Recall, in 2014, a Supreme Court constituted high-powered committee had recommended scrapping of 23 out of 24 hydel projects slated for construction above an altitude of 2,000 metres in the aftermath of the 2013 floods but for reasons best known to it the Government ignored it.

Undoubtedly, the Chamoli disaster is a wakeup call of our obtuse developmental priorities and proves our inability to sustainably develop ecologically sensitive zones. It is another alert against unregulated construction throughout Uttarakhand’s river valleys and floodplains. The Government needs to highlight its priorities, formulate policies based on needs and find solutions. Time it spent more resources in monitoring the region better so that it has more information about the change process whereby it could develop better adaptation practices.

The powers-that-be need to involve experts and environmentalists with a genuine track record who would evaluate the ecological problems in the Himalayan region, rethink the current development model, study its context and be involved in decision and policy-making. With special emphasis on problems created by burgeoning population and its impact on the local eco-system, growth of hap-hazard housing, environmental  insanitation and decay.

It is now imperative to weigh up our management strategies, see how effective they are, establish responsive early-warning systems including radar-based technologies along-with approaches to safeguard the environment, build infrastructure, improve service delivery, establish close links between research and service with the aam aadmi at the centre of development. The writing is clearly on the wall. Development cannot happen at the cost of the environment. Our polity needs to pull up their bootstraps and focus on long-term rather than short-term planning. One needs neither a bleeding heart nor blindness to know what should be done. For if we still elect to do nothing about disaster it only holds out promises of more misery, more wrenching news bulletins and more cries. Bringing to mind words from an old comic: We have seen the enemy and it is us.