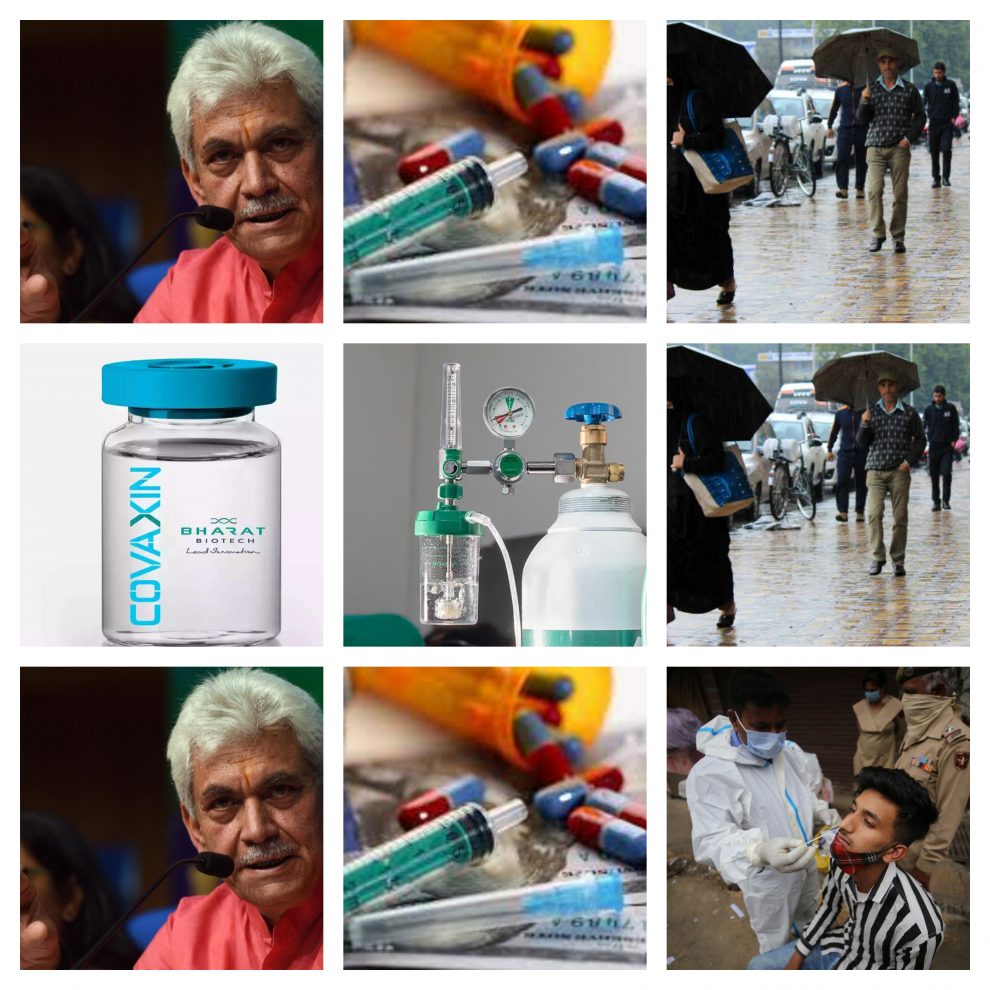 SRINAGAR, Apr 17: A lady sustained bullet injury on Saturday after the vehicle she was travelling in, was fired upon by the Central Reserve Police Force (CRPF) party due to mistaken identity over ‘suspicious act’ of the driver, who was hit a policeman and didn’t stop after being signaled to stop at twin places in Awantipora area of South Kashmir. Read more on The Dispatch

SRINAGAR: Concerned over the spike in coronavirus cases, the Jammu and Kashmir administration on Saturday restricted the ceiling on social gatherings to 100 people and also announced the postponement of Class 11 examination.

The latest directive comes two days after Lt Governor Manoj Sinha-led administration deferred biannual ‘darbar move’ to Srinagar, extended closure of all schools up to and including Class 12 till April 30 along with private coaching centres. It also cancelled the ongoing Class 10 examination being conducted by the Jammu and Kashmir Board of School Education (JKBOSE). Read more on The Dispatch

Jammu: Jammu and Kashmir administration on Saturday constituted a committee to ensure adequate and timely supply of medical oxygen to all hospitals to meet the requirements of COVID-19 patients, an official order said.

The committee would be headed by the Principal Secretary, Industries and Commerce department, the order issued by Manoj Kumar Dwivedi, Commissioner Secretary, General Administration Department, said. Read more on The Dispatch

Deputy Commissioners approving plan, works on their own, violating protocol: Head of DDCs to LG

JAMMU: The newly elected District Development Council  (DDC) chairperson of few districts have accused concerned Deputy Commissioners for working on their own while violating law and sought intervention of Lieutenant Governor of Jammu and Kashmir   Manoj Sinha.

As per the reports,  DDC Ramban chairperson Dr Shamshad Shan and DDC Udhampur vice chairperson Juhi Manhas Pathania have written to the Lieutenant Governor comprehensive letters briefing him on host of decisions taken by the District Development Commissioners while Kishtwar DDC chief Pooja Thakur has also charged the DC with violation of protocol and giving them the office which is not even fit for Class-IV employees. Read more on The Dispatch

The number of active coronavirus cases in the country has surpassed the 16-lakh mark, the ministry’s data updated at 8 am showed.

Registering a steady increase for the 38th day in a row, the tally of active COVID-19 cases has climbed to 16,79,740 in the country, accounting for 11.56 per cent of its total caseload, while the national COVID-19 recovery rate has dropped to 87.23 per cent. Read more on The Dispatch

RAJOURI, Apr 17: The security forces have launched a Cordon and Search Operation in Rajouri town after reports of some suspicious movement.

Officials said that joint teams of army and police have launched Cordon and Search Operation in Dhani Dhar locality and entire area has been cordoned. Read more on The Dispatch

The rainfall also brought the minimum temperature down as Srinagar recorded a low of 7.2°C against 7.8°C on the previous night. The temperature was below 0.2°C normal in the summer capital of J&K for this time of the year, he said. Read more on The Dispatch

They said that the persons identified as Mohammed Yousaf Bhat resident of Pringroo and Javid Ahmad Khan resident of Gund Chibutra were intercepted by a police team during a naka on intervening Friday and Saturday night, while on board a vehicle Santro bearing registration number JK-09 0504 at Khan Tulwari Langate area. Read more on The Dispatch

Under Atmanirbhar Bharat 3.0 Mission COVID Suraksha was announced by the Centre to accelerate the development and production of Indigenous COVID Vaccines. This is being implemented by Government of India’s Department of Biotechnology. Under the Mission the Department of Biotechnology is providing financial support as Grant to vaccine manufacturing facilities for enhanced production capacities. Read more on The Dispatch

Over 79% of new Covid cases reported from 10 states, says Government

New Delhi:  Government has said that more than 79 per cent of new Covid 19 cases have been reported in ten states. These states are Maharashtra, Uttar Pradesh, Delhi, Chhattisgarh, Karnataka, Madhya Pradesh, Kerala, Gujarat, Tamil Nadu and Rajasthan. Union Health Ministry said, Maharashtra has reported the highest daily new cases at 63 thousand 729. It is followed by Uttar Pradesh with over 27 thousand while Delhi reported more than 19 thousand 486 new cases. Read more on The Dispatch

“Janbhagidari would be the foundation of formulation and implementation of District Development Plans. Aspirations and expectations of common people and elected representatives, besides needs of the districts would be reflected in the Plans,”Lieutenant Governor, Manoj Sinha said according to The Dispatch while chairing a meeting with all Deputy Commissioners of Jammu and Kashmir to discuss the effective formulation of District Development Plans. Read more on The Dispatch

Srinagar: Mutahida Majlis-e-Ulema (MMU) Jammu and Kashmir – an amalgam of various religious bodies headed by Hurriyat Conference chairman Mirwaiz Umar Farooq – on Saturday expressed serious concern over the second wave of COVID-19 infections and appealed people of the Union Territory to get vaccinated. Read more on The Dispatch