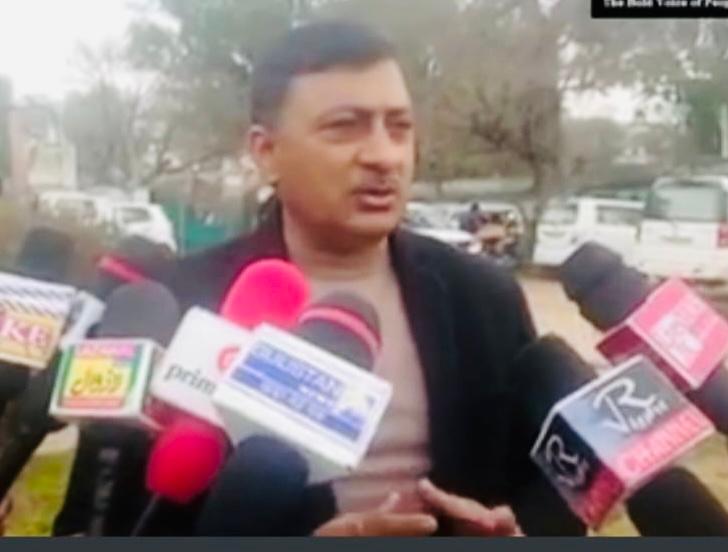 *PAGD frustrated by rising popularity of *BJP in Kashmir: Vibodh*

Sringar, February: BJP State General Secretary and former MLC Vibodh Gupta today addressed the media persons and lashed out at the politics of hate by PAGD. He said that recent DDC elections with massive participation in all areas of UT are a great success of the Vision and mission of Modi Government for a new and vibrant Jammu & Kashmir. On this occasion he informed that during the election campaign also he personally visited many remote corners of Kashmir and was overwhelmed by the response of people towards BJP and its nationalist policies and programmes. He told that the growing popularity of BJP in valley has frustrated Gupkar Gang.

Vibodh said, ”it was the stand of BJP that PAGD will slowly be broken into pieces once elections are over as it has been formed on selfish grounds. This has happened now and today PAGD leaders and parties have already started partying ways from each other due to their own differences. Today PAGD has totally become irrelevant across Jammu & Kashmir as DDC polls emerged as farewell party for Gupkar Gang by people”.

Vibodh maintained that the way in which people have rejected the politics of hate and terrorism by PAGD is a victory of nationalist forces and a victory for the people of Jammu and Kashmir. While referring to the plight of people in Jammu & Kashmir during the past 70 years, Vibodh said that parties mainly National Conference, Congress and Peoples Democratic Party are the parties which enjoyed power at the cost of lives and blood of common man on the streets of Kashmir. This he said is the only reason that during recent DDC elections PAGD has been pushed to the corner and has been shown the place which it deserves.

During this interaction Vibodh also highlighted that rejection of PAGD by people during DDC elections is a success of the vision of Hon’ble PM Sh. Narinder Modi for a new Kashmir. Today people have once again reimposed their complete faith on the BJP and the Modi Government and this he said is the main reason for massive participation of people in the democatic process without a single incidence of violence. While accusing the leaders of PAGD for their double standards, Vibodh advised these leaders that they must understand the fact that now the days to fool common masses with emotions are over.

While reacting to some specific questions from the media persons, Vibodh said that today people in Jammu & Kashmir want a bright future for their young generation and jobs for the educated youth. They no longer want any violence in any corner of the state and they wanted to give books and laptops in the hands of younger generation instead of guns. Vibodh concluded his address by giving a call to everyone to join the vision of Hon’ble PM Narinder Modi who wants to take Jammu and Kashmir to a new path of progress, growth and prosperity.