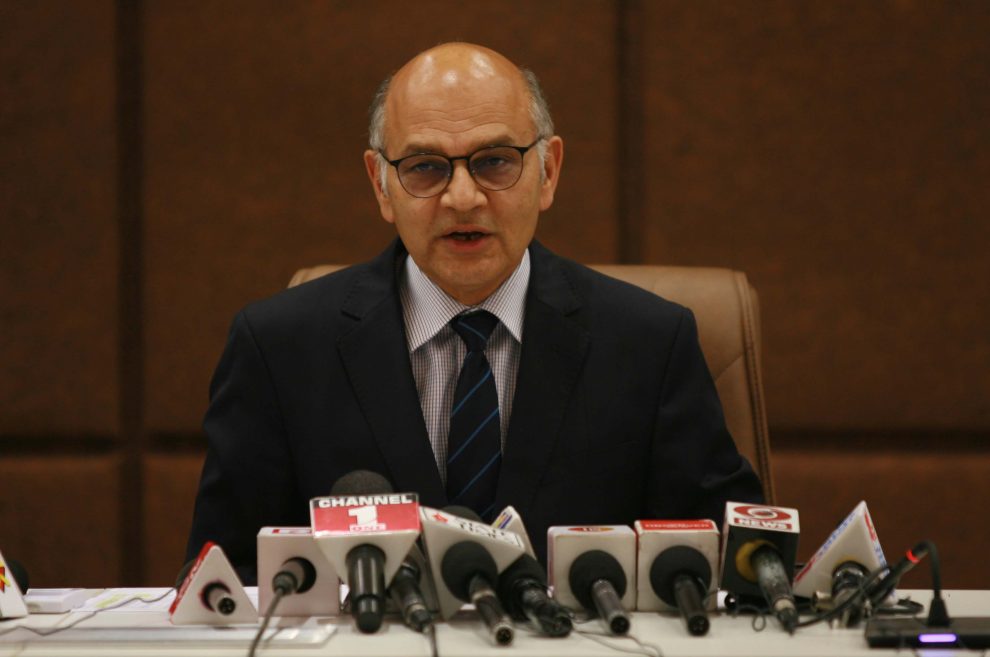 1305 POLLING STATIONS IN VALLEY, 837 IN JAMMU; HOPEFUL OF LARGER PARTICIPATION OF PEOPLE IN PHASE- TWO AS WELL; NO CANDIDATE BARRED FROM CAMPAIGNING; MEHBOOBA BEING EX CM NEEDS TO FOLLOW SECURITY PROTOCOL WHILE VENTURING OUT; PEOPLE MUST WEAR FACE MASKS BEFORE CASTING VOTES

Srinagar, Nov 30: State Election Commissioner (SEC) K K Sharma Monday said every polling booth in Kashmir is sensitive and that adequate security measures are in place for the second phase of District Development Council (DDC) in which 43 constituencies will go for polls tomorrow.

Sharma reiterated that no candidate is barred from going for campaigning and that PDP chief Mehbooba Mufti being the former chief minister of erstwhile J&K, needs to follow security protocol while going out. Addressing a press conference here, Sharma said that all arrangements are in place for the phase-two with adequate security in place.

“In Kashmir every polling booth is sensitive and is guarded with adequate number of security forces personnel,” Sharma said as per news agency—Kashmir News Observer (KNO), adding that he was hopeful of larger participation of people in the phase two of DDC polls tomorrow. “I hope people will come out in good numbers without fear and participate in polls so that DDC’s are formed in each district to give development a new push.”

There are 280 DDC constituencies in J&K and each district has 14. “In phase two, 25 constituencies will go to polls in Kashmir and 18 in Jammu region,” he said. He said that there are 321 candidates in the fray for DDC polls of which 196 are from Kashmir and 125 in Jammu.

He said there are 7.90 lakh voters eligible for the DDC polls while total number of polling stations is 2142 of which 1305 are in Kashmir and 837 Jammu. It is pertinent to mention that phase-1 of the DDC polls witnessed 52 per cent voting.

To a question that there are reports that PAGD candidates are barred from campaigning, he said that a few complaints were received by him on WhatsApp and the same were forwarded to IGP Kashmir, who has taken up the issue with the concerned SSPs. “I reiterate that no candidate is barred from campaigning and that there are at times security risks. For us human lives matter. Candidates are advised to inform the police so that necessary security arrangements are made for their campaigning,” he said, adding that some candidates have been elected unopposed and they will soon be allowed to go to their respective homes under proper security cover.

About the PDP chief Mehbooba  Mufti’s accusations that she was not being allowed to venture out, the SEC said that Mehbooba being a former chief minister of erstwhile J&K State, there is a set protocol which has to be followed by police whenever she tries to go out. “As far as her Friday’s visit, that was not for campaigning. She is free to do campaigning for her party candidates under proper protocol,” she said.

Sharma urged the voters to follow Covid-19 protocol in spirit and wear face masks while being in queues, stating that 10 litres of sanitizers have been kept at all polling booths. He also said that West Pakistan Refugees (WPRs) participated in the election for the first time. “The exact number of WPRs who participated in the poll process first time, will be provided to the media separate,” he said