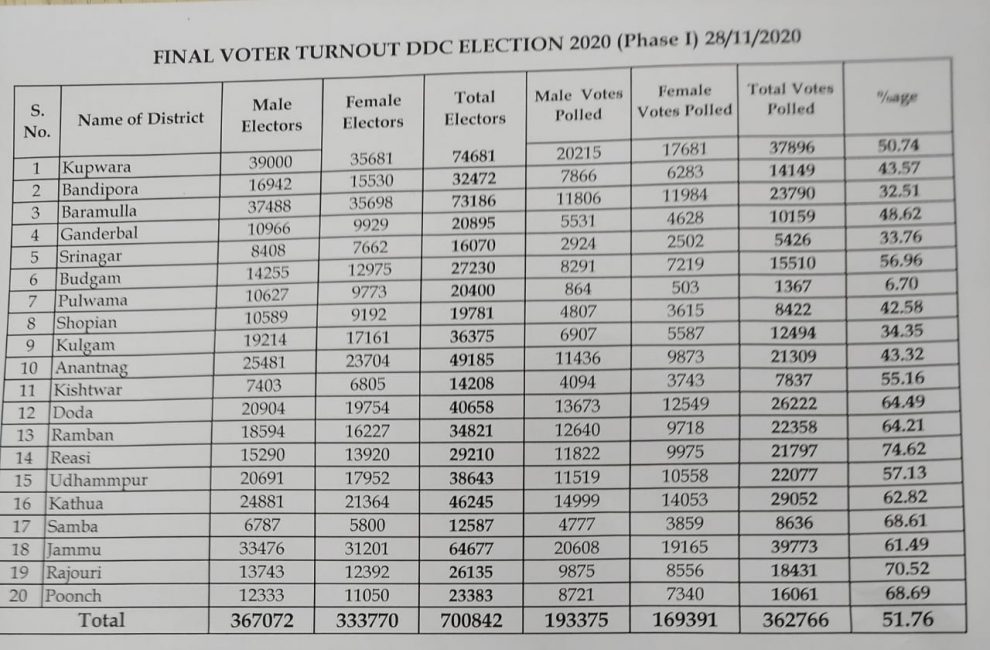 Srinagar, Nov 28: State Election Commissioner (SEC) K K Sharma Saturday said that amid Covid-19 pandemic and bone chilling cold in Kashmir and some parts of Jammu, a large number of people participated in the first ever District Development Council (DDC) polls and 51.7 per cent voting was recorded for the phase one in J&K UT.

Addressing a press conference in Jammu, SEC Sharma said that barring small incident of stone pelting in Kulgam district of South Kashmir, election process for the phase-1 of DDC polls passed off peacefully. “There was a small incident of stone pelting (at Kulgam). Police have already taken cognizance of the incident,” he said as per news agency—Kashmir News Observer (KNO)

Sharma said that 43 DDC constituencies went to polls where 7 lakh voters were registered. “Total per cent of voting for J&K UT was 51.7.  In Jammu, voting per cent was 64.2 percent and in Kashmir, poll 40. 65 percent voting was recorded,” he said.

“In the phase one, 43 constituencies went for poll in J&K of which 25 were in Kashmir and 18 in Jammu,” the SEC said.

He said the first phase recorded large participation of people and most of the voting took place between 7 am to 8 am. “Out of the 362000 votes polled, 193000 were male and 169,000 were females,” Sharma said. The SEC, congratulated all the candidates including those who fought independently for taking part in the DDC polls—(KNO)