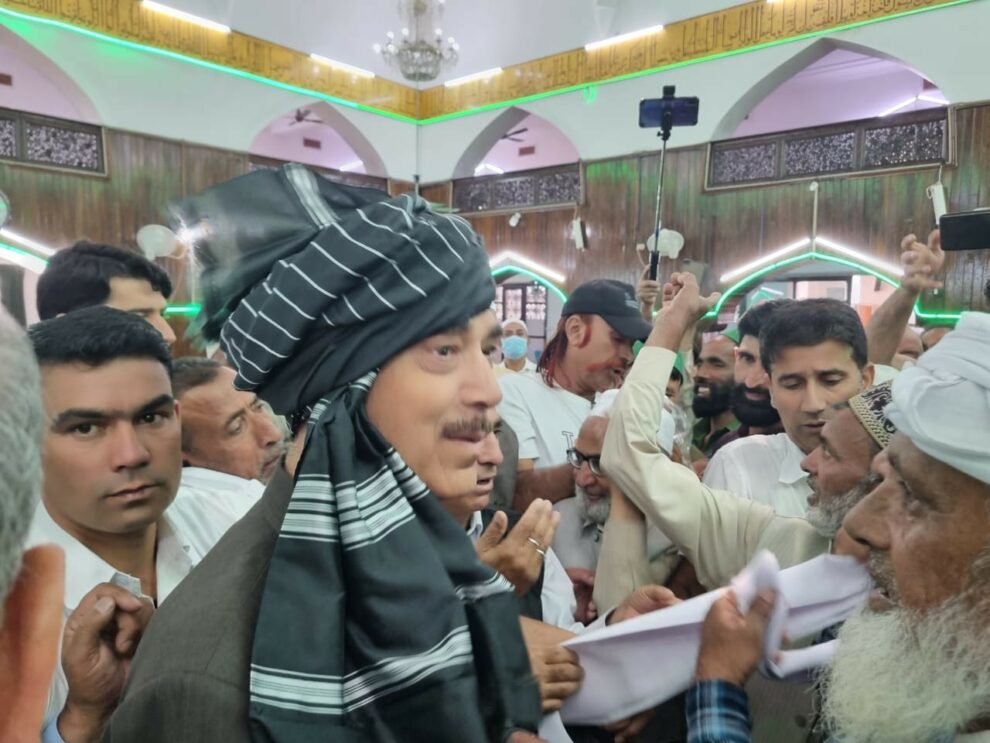 The Dispatch Staff
Add Comment
In Kashmir, the most recent high-profile ‘dastaar-bandi’ was of former Congress veteran Ghulam Nabi Azad who has recently campaigned across Jammu and Kashmir ahead of launch of his own political party.

Srinagar: The Jammu and Kashmir Wakf Board has issued strict orders banning ‘dastaar-bandi’ of politicly affiliated persons at shrines and mosques and other religious places governed by the provisions of the Wakf Act.

The Jammu and Kashmir Board, headed by BJP senior leader Dr Darakshan Andrabi, said it is in receipt of a number of complaints regarding ‘unethical use of the platform of Zeyarats to appease influential persons, particularly the political leaders through turban-tying. The leaders continue to be invited at Zeyarats and their ‘dastaar-bandi’ is carried out on the basis of party affiliations to promote political agenda at the sacred religious places.

The order issued by Executive Officer of the Wakf Board said that its chairperson Dr Darakshan Andrabi has taken serious view of the matter. The Board, the order further said, “is of the view that religious places can only be used to promote religious activities and ‘dastaar-bandi’at such places can only be carried out to felicitate people for their achievements in the field of religion”.

‘Dastaar-bandi’, is a Persian word loaned through Punjabi, meaning tying of turban, or ‘dastaar’, around head. While in the religious parlance, Sikhs and Muslims accord high importance to dastaar-bandi on someone’s achievement, particularly in the field of religion but certainly not limited to it. In most of North and Central India, tying turban around a dignitary’s head is most common at political, social and cultural events.

Mosques, shrines and other religious places have often witnessed ‘dastaar-bandi’ of prominent visitors, including politicians. Though certainly not backed by religious requirement, such felicitations are mostly guided by prevailing power dynamics and party affiliations.

In Kashmir, the most recent high-profile ‘dastaar-bandi’ was of former Congress veteran Ghulam Nabi Azad who has recently campaigned across Jammu and Kashmir ahead of launch of his own political party.

Azad was on last Thursday honoured at Hazratbal, Kashmir’s most influential shrine, by ‘dastaar-bandi’ in a gathering of dozens of his supporters.

Join The Dispatch Whatsapp Group to stay updated
The Dispatch is present across a number of social media platforms. Subscribe to our YouTube channel for exciting videos; join us on Facebook, Intagram and Twitter for quick updates and discussions. We are also available on the Telegram. Follow us on Pinterest for thousands of pictures and graphics. We care to respond to text messages on WhatsApp at 8082480136 [No calls accepted]. To contribute an article or pitch a story idea, write to us at [email protected] |Click to know more about The Dispatch, our standards and policies
TagsDarakshan Andrabi Dastaarbandi Ghulam Nabi Azad Shrines of Kashmir Wakf Jammu Kashmir