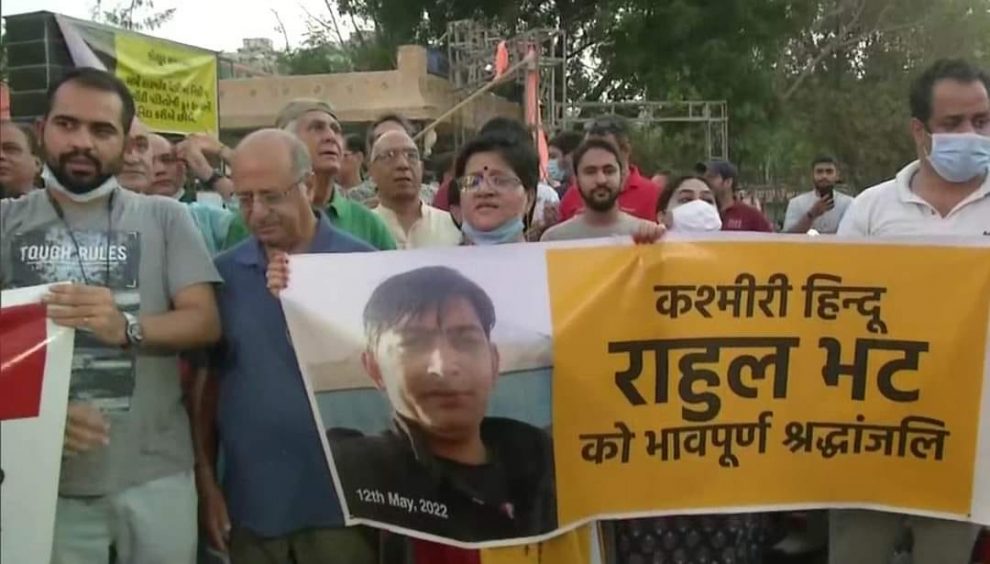 BUDGAM: Protests by Kashmiri Pandits (KPs) over the killing of their colleague Rahul Bhat by militants continued for the seventh consecutive day in various parts of Kashmir. The protesting KPs held a candlelight protest march from Sheikhpora to Humhama in Budgam

The KP’s who are on a sit-in at Pandit colony Sheikhpora against the killing of their colleague, for the last seven days, have been demanding their relocation to a safe environment.

Protesters continued their sit-in for the day and in the evening, they started their march towards Humhama Airport road while holding candles.

“We will continue our protest until the government takes some further steps to protect us,” the protesters said. “The only demand we have for the last week is to shift us to safe and safer locations where we could feel secure. In Kashmir, a minority community person is being selected, then targeted and killed and we don’t want to die, we don’t want to see more Rahuls,” a woman protester said.

She said that although the government claims that it was working on accommodating and some other things, however, they would not end the sit-in until all their issues were resolved.

After marching peacefully to Hamama Chowk, the protesting KP’s returned back to Pandit Colony, Sheikhpora, peacefully. The KP members are up in the arms for the past one week in the wake of the killing of their colleague Rahul Bhat. Rahul was killed inside Tehsil office Chadoora, Budgam by militants last week. He is survived by his parents, wife, and little daughter. J&K administration has announced a job for Rahul’s wife and announced that it will bear all education-related expenses of his daughter—(KNO)