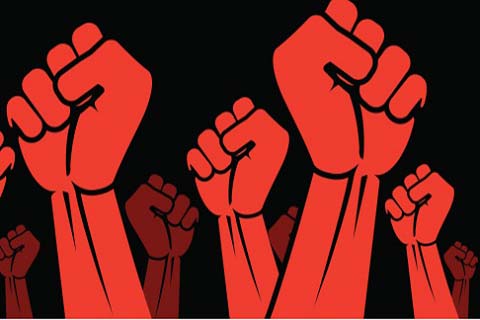 Srinagar, Aug 25: Hundreds of casual and seasonal labourers of different departments on Tuesday hit the streets in Srinagar and other parts of the valley in support of their demands, including release of pending wages and regularization of their service and implementation of minimum wages act in the Union Territory (UT) of Jammu and Kashmir.

The casual labourers of Tourism Department and Gulmarg Development Authority (GDA) also organized protests at several places in support of their demands, including release of pending wages and regularization of their services.

Hundreds of casual labourers under the banner of Jammu and Kashmir Casual Labourers United Front (JKCLUF) held a massive protests in summer capital and other areas in the valley alleging that despite repeated assurance their demands were not fulfilled.

We demand immediate release of pending wages, implementation of minimum wages Act and regularization of their services, a representative of the CLUF told media persons. He said some of the labourers are working in their government departments for the past 20 to 25 years without being regularized. Similar difficulties were being faced by Irrigation and Flood Control (IFC) labourers, seasonal workers.

After the J&K become UT we were promised that minimum wages Act would be implemented but nothing has changed, he said adding under the Act a labourer could get Rs 18000 per month.

Casual labourers of GDA also protested against the administration for failing to release their pending wages and delaying their regularization.

Over 300 casual labourers of tourism department also protested against the government for not regularizing their service. They also alleged that despite meetings with Director , secretary and other senior officers their wages had not been released since June 2014.