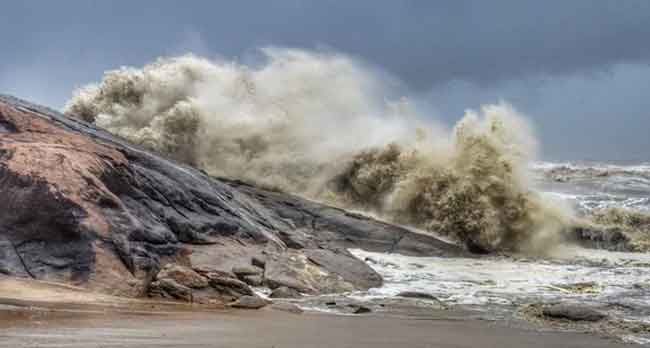 India Meteorological Department (IMD) has said that cyclonic storm Tauktae has intensified and is expected to reach the Gujarat coast by Tuesday and bring heavy rain to some areas.

It is likely to cross Gujarat coast between Porbandar & Naliya.

The cyclone is likely to cause heavy rainfall in the coastal districts of Gujarat including Junagadh, Gir Somnath, Saurashtra, Kutch, Porbandar, Devbhoomi Dwarka, Amreli, Rajkot, Jamnagar, and Diu.

Western Railway said it has canceled 56 trains either originating or terminating in Gujarat’s Saurashtra region as a precaution.

IMD has issued an ‘orange ‘ which means heavy to very heavy rainfall is likely over the entire Konkan and hilly areas of western Maharashtra, mainly Kolhapur and Satara today and tomorrow.

After reviewing the state preparedness at a meeting last evening, Mr Rupani said that the government is monitoring the movement of cyclonic storm and taking all necessary steps.

AIR correspondent reports, according to official sources, 24 teams of NDRF are being deployed in Gujarat following the threat of a very severe cyclonic storm.

District administrations have been asked to take action with zero casualty approach.

Authorities have been asked to maintain electricity supply in all Covid hospitals with additional support of Diesel Generator sets.

Ambulances and ICU Ambulances with advanced life support systems will be kept standby in Jamnagar, Junagadh, Rajkot and Kutch districts of Saurashtra and Kutch.

District administrations in the coastal areas have been asked to ensure the safety of fishermen and salt workers.