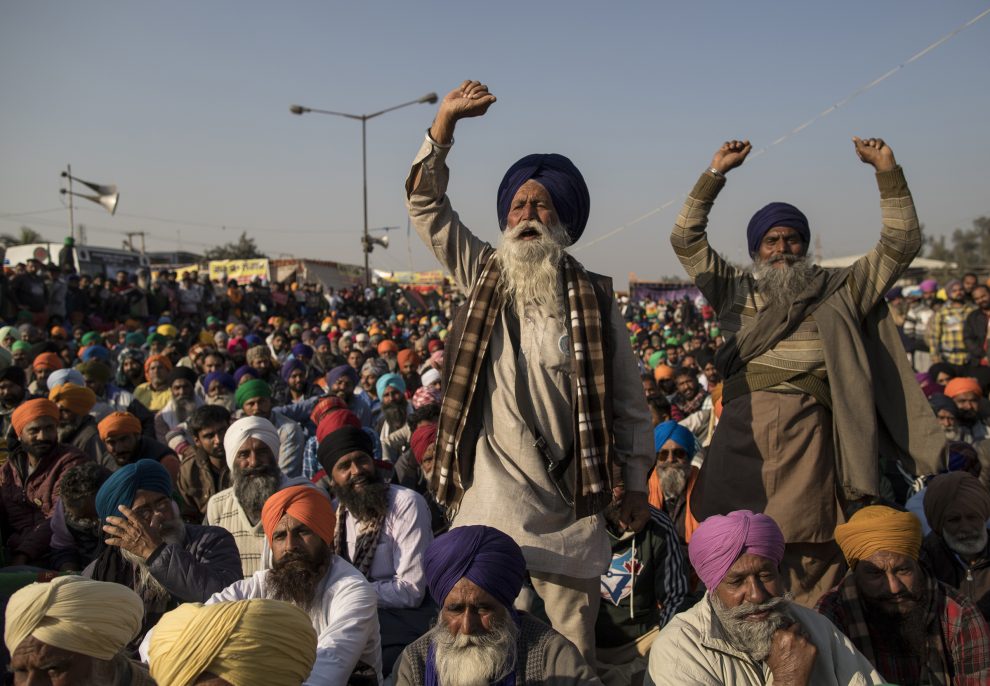 In this silly political season where Governments are busy indulging in symbolism of ‘my Dalit Chief Minister in Punjab vs ‘my Brahmin-OBC Cabinet in UP,’ why should farmers be behind?   Curse all you want but India thrives on tu-tu-mein-mein aka protests. The voice of resistance. The voice that says, enough is enough, which has perfected the saying “jiski laathi uski bhains”!

It is all about registering ones dissent, the louder the better. Success is measured in terms of causing maximum dislocation and discomfiture. And over the last 10 years we see this voice raised aloud. India has witnessed number of protests cutting across cities, classes and communities, from farmers, students, Dalits, Muslims to women.

In Odisha Nirman Sramika Sangha blocked roads in Bhubaneswar. In Karnataka, a ‘Rasta Roko’ led to disruption in vehicular movement in Bengaluru and several other parts. Public transport was hit in Kerala thanks to both the ruling LDF and opposition Congress-led UDF support. Parties too joined the melee. Besides the Congress, Left, AAP, Samajwadi, BSP, YSR Congress, TDP and Swaraj India. Perhaps to score brownie points.

Raising a moot point: What role do protests/ bandhs play in our functioning representative democracy? Are strikes actually expression of freedom or are they means of suppressing fundamental rights in a democracy? Why do protestors resort to this measure?  Is the cause valid? Is the State being unjust or unreasonable?

Importantly, will sit-ins on roads be the new grammar of Naya Bharat’s protests? Is it the new political paradigm of dissent? To keep its flock together? Ignominy of becoming irrelevant?  Or political considerations? Why are they allowed, despite innumerable court rulings banning them?

Sure, protest is an exciting word, the sustenance of democracy and a catchphrase for free speech. It connotes peaceful march against issues from the mundane to dastardly, injustice meted out by authorities, against a law, aggression by the police, inaction by those in authority and what is perceives as encroaching on their freedom.

Over the decades each protest sowed hope that the gripe would reap dividend. Yet one thing that stands clear is people are ready to take to the streets to defend their rights as well as the integrity of the Constitution against all attacks, even from the Government. True, some laws were changed, some repealed, some guilty punished, some systems established, on some the Government refused to budge.

Gone are the days when it took months or days to plan a protest. In today’s digital media world, it is easy to organize dissent. Remember Nirbhaya outpourings started with a SMS or Hazare’s dharna reflection of “people power” who came out in droves against the endemic corruption during the UPA II regime.

Besides, it is easy to identify classic protestors who believe in the cause but there are others who join as they have nothing better to do and not a few who join the free ride as it is ‘fashionable’. While not a few are interested in “épater la bourgeoisie” (shock the bourgeoisie) than in coming up with viable solution for the cause they are protesting against.

Further, some simply shrug off protests as “sab chalta hai attitude, this is Mera Bharat Mahan at its rudest and crassest best.”  Many assert “ki pharak painda hai.” Indeed, India has travelled a long way from Lokmanya Tilak’s “Swaraj is my birth right” to “protest is my birth right.” Today, every other section of the society plans strikes as a matter of routine to stall anything that spells change from the set routine.

As India marches ahead, are protests the right recourse? Certainly, the Constitution guarantees one the right to protest, but it does not guarantee one the right to infringe upon others rights. Unfortunately, our strikers fail to realize that strikes negate the basic concept of democracy. These are just a camouflage for non-performance, self-glorification, to flex their might and muscle, to gain sympathy or wriggle out of working hard.

Remember, democracy is neither mobocracy nor a license to create bedlam. It is a fine balance between rights and duties, liberties and responsibilities. One’s freedom pre-supposes another’s responsibilities and liberty. Importantly, protests cannot set things right and at the same time it cannot create any psychological impact or pressure on the minds of those people who are sitting at the helm of affairs.

Unless protesters have a viable alternative to offer, continuing a strike could lead to chaos and tyranny of the mob. Alongside, losses in terms of human casualties and damage to the economy and businesses. Paralysing the State, black-mailing corporates, industries to get attention and policy reversals only exasperates the public and inconveniences them, cuts off the money flow, shoos off investors and endangers their own jobs.

Undeniably, there is no harm in peaceful protests. Yet unending dissent just to muscle the Government to bend only threatens to undermine the legitimacy of Indian democracy: For, it offers no viable alternative and only the chilling prospect of chaos alongside, losses in human casualties, damage to economy and businesses.

Clearly, the time has come to take a leaf from out the US law, wherein there is no Constitutional right to make a speech on a highway or near about, so as to cause a crowd to gather and obstruct the highway. The right to assembly is to be so exercised as not to conflict with other lawful rights, interests and comfort of the individual or the public and public order.

In the UK, the Public Order Act, 1935 makes it an offence for any person in uniform to attend any public meeting, signifying his association with any political organization.  The Prevention of Crime Act, 1953, makes it an offence to carry any weapon in any ‘public place’ without lawful authority.  The Seditious Meetings Act, 1817 prohibits meetings of more than 50 persons within a mile of Westminster Hall during the sittings of Parliament.

We need to remember India is a civilized democracy, a fine balance between rights and duties, liberties and responsibilities. Whereby, a citizen’s right is paramount. One’s freedom pre-supposes another’s responsibilities and liberty. Alongside one’s freedom ends where another’s nose begins!

The question we all need to ask is: Can we afford protests at all, leave aside for what purpose it may have been called? At some point we have to stand up and bellow, “Bandh karo ye bandh!