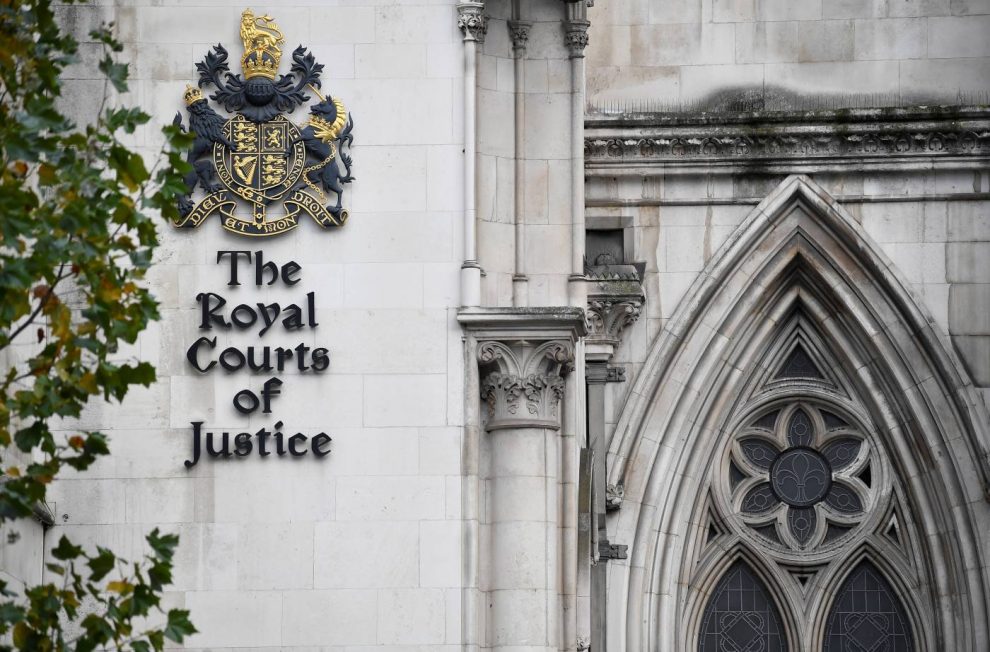 LONDON: Campaigners pushing back against transgender rights in Britain have used crowdfunding websites to fund at least 18 lawsuits in the past four years, from challenging guidelines for schools to accommodate trans pupils to restricting puberty-blocking drugs.

Almost one million pounds ($1.3 million) has been raised since mid-2017, an investigation by the Thomson Reuters Foundation has found.

Both supporters and sceptics of trans causes in Britain have turned to sites such as CrowdJustice, GoFundMe and Crowdfunder, with the websites’ backers saying the funding lets their voices be heard, although many trans rights campaigners worry about their impact.

Since mid-2017, more than 800,000 pounds has been raised via about 27,500 donations to fund about 16 trans-focused legal cases on CrowdJustice, a crowdfunding site set up specifically for lawsuits, according to a tally by the Thomson Reuters Foundation.

“Basically, money is being used to bully,” said Clara Barker, who contributed to a Trans Toolkit For Schools that was withdrawn in May after a crowdfunded lawsuit against Oxfordshire County Council in southern England.

“It certainly feels like there (are) deeper pockets for those challenging our rights than those trying to protect our rights,” said Barker, an academic at the University of Oxford who is trans and also runs an LGBT+ youth group.

Crowdfunding platforms have been utilised by both sides, as the increasingly bitter row in Britain over whether trans rights encroach those of other women has spilled over into the courts.

Supporters of crowdfunding platforms say they enable people without the funds to hire a lawyer to seek justice in cases of broad public concern.

“You’re interested in the issue, you’re looking online, you find the organisations fighting on your side, you look them up, and they are raising money on crowdfunding,” said a 50-year-old who often gives up to 50 pounds to trans cases via crowdfunding websites.

“These cases matter because they’re the only way we can have the debate,” said the marketing director, who declined to have her name published due to the controversy around trans issues.

Since Nov. 23, the Good Law Project, a legal non-profit, has raised about 115,000 pounds on CrowdJustice, with its first trans-related case supporting a trans teenager against England’s health service over a delay in accessing specialist gender care.

“Those who want to roll back the rights of trans and non-binary people are turning to litigation to do so,” the non-profit, which takes 10% of donations to cover running costs, said on its fundraising page. “It’s time to push back.”

Crowdfunding – the pooling of small amounts of money via online platforms – has taken off in the past decade, with billions being raised globally for everything from medical treatments to property ventures and charitable causes.

GoFundMe said last year that $9 billion had been raised using its platform since 2010, while CrowdJustice says on its site that 10 million pounds has been collated for legal cases since its founding in 2015. Both take a small cut of donations.

While the row over trans rights has stirred public emotions and sparked parliamentary debates, crowdfunding websites stress they take no side in the debate.

Julia Salasky, who founded CrowdJustice in 2015, said earlier this year that the site takes “no view on the substance or legal merits” of trans rights debates and is “proud of the fact that it promotes access to justice for a wide spectrum of legal cases”.

CrowdJustice did not respond to numerous requests for further comment.

Other crowdfunding sites have also been used to fundraise for legal cases related to trans issues.

Since 2018, Jennifer James, a political activist who claimed she was suspended by the Labour party for objecting to trans women being included on all-women shortlists, has raised about 32,000 pounds for a lawsuit on GoFundMe.

GoFundMe removed the page after the Thomson Reuters Foundation asked if and how it had been assessed against the company’s terms and conditions.

A spokeswoman said by email that the page violated a ban on supporting “hate, violence, harassment, bullying, discrimination, terrorism, or intolerance of any kind”.

More than half of the 18 crowdfunded cases that relate to trans issues on CrowdJustice, GoFundMe and Crowdfunder involve free speech in challenging trans rights, including at work and universities.

Two lawsuits claim that equality law is being applied incorrectly to give trans women the same rights as other women, while four involve challenges to healthcare and school policies for children questioning their gender.

‘FIGHTING ON YOUR SIDE’

The legal crowdfunding campaigns come as trans rights activists and their supporters spar with some feminists, with both sides using social media to build communities and shame those with different views.

There is no direct regulation of donation-based crowdfunding in Britain but solicitors and barristers who take cases are bound by their professional codes of conduct.

The lawsuits were collated by the Thomson Reuters Foundation by searching for terms including “transgender” on crowdfunding sites and social media accounts that promote the campaigns.

The trans-related campaign that has raised the most money is that of Maya Forstater, a researcher who lost her job after tweeting that trans women are “males” and cannot change biological sex, which some said was transphobic.

Forstater has raised about 118,000 pounds towards her lawsuit on CrowdJustice and is continuing to raise more to fund an appeal against an employment tribunal ruling that her sacking was lawful, winning online support from “Harry Potter” author J.K. Rowling.

“I have been blown away by the response to my crowdjustice campaign,” Forstater wrote on her fundraising page after reaching her initial 30,000 pound target in under eight hours.

Forstater and the law firm representing her confirmed by email that her case was fully funded by the crowdfunding campaign, although did not respond to a further request for comment.

Three appeals involve England’s sole youth gender identity clinic, run by the Tavistock and Portman NHS Foundation Trust, with a landmark case this month leading to the restriction of puberty blockers for children under the age of 16.

Schools are another key battleground for campaigners, as the Equality and Human Rights Commission, Britain’s anti-discrimination body, has yet to finalise national guidelines relating to trans pupils.

Tracy Shaw, an Oxfordshire mother, said she became concerned about trans issues when she realised a national gymnastics policy would allow trans girls to change in a female changing room and compete with her daughter, a competitive gymnast.

She and other mothers began challenging Oxfordshire County Council in 2018 over its “Trans Toolkit for Schools”, which advised schools to let trans children use toilets and changing rooms that match their gender identity.

“Any child who’s not happy in facilities of their biological sex, then schools need to work together with that child’s parents to see how they can support them,” Shaw told the Thomson Reuters Foundation.

“It’s certainly not a case that you move them into opposite sex facilities, because there’s huge safeguarding issues there, there’s privacy and dignity issues.”

Trans rights campaigners, however, say there is no evidence for such safety fears over women and girls’ spaces, including in schools, female toilets and shelters, a recurring theme in many crowdfunded campaigns concerning trans issues.

Shaw said that she and about 130 other people with concerns about trans-inclusive school policies formed a campaign group in mid-2019, the Safe Schools Alliance (SSA), which started lobbying the council to change or withdraw the Trans Toolkit.

One SSA member, Victoria Edwards, turned to CrowdJustice, where she wrote: “The guidance compels schools to allow male pupils who identify as girls to share changing rooms, toilets and dorm rooms on residential trips with female pupils.”

Within months, she raised 23,000 pounds and scored a high-profile victory in the first case to challenge trans policies in British schools, with Oxfordshire County Council withdrawing the guidelines before the High Court ruled on their legality.

The case was fully funded via crowdfunding and the council ordered to pay Edwards’ legal costs, an SSA spokeswoman said.

The council did not respond to requests for comment but said on its website that it sought to safeguard trans children while complying with the law and continuing the court case during the coronavirus pandemic would have “diverted valuable resources”.

A total of 17 of about 150 local authorities in England and Wales have withdrawn trans guidelines for schools, the SSA said on its website in July, alongside a template letter for parents to send to other authorities, demanding they follow suit.

“(SSA are) just one of a number of pressure groups that seem to be incredibly well-funded,” said Kacey de Groot, a teacher who is trans and LGBT+ representative with the National Education Union.

“When these toolkits are removed, if a school that hasn’t had to deal with any trans kids suddenly finds themselves in a position of having to deal with that situation… they’re more likely to find the wrong advice.”

Parents of trans pupils said campaigns and lawsuits seeking to block support for their children could put lives at risk in a minority with high rates of depression, self-harm and suicide.

Michelle’s son, who came out as trans aged 12 in 2017, was almost goaded into jumping off a roof at school, she said, after being bullied online by other pupils.

Three years on, her son has “hardened right up”, dealing better with transphobic comments at the girls’ school he continues to attend in Kent in southeast England, because he fears the bullying would be worse if he moved elsewhere.

Michelle, who declined to publish her full name, said her son uses a disabled toilet at school but this was “not adequate” as it singled him out as different – a common concern raised by trans pupils in Britain.

“These toolkits do give schools the tools to be able to make sure … they’re not the odd one out in the corner,” Michelle said, lamenting Kent County Council’s decision to remove its trans-inclusive guidelines this year.

The council did not respond to requests for comment.

When LGBT+ youth attend schools that affirm their identity, such as referring to trans pupils by their chosen pronouns, attempted suicides fall from 20% to 11%, according to a study by the U.S. suicide prevention charity The Trevor Project.

“The crowdfunding campaigns and their coverage by mainstream British media can lead to a culture of fear,” she said.

“Fear-mongering, that’s what they’re doing. They misrepresent the reality of what it means to be trans, whether as an adult or a child. They’re weaponising it and just monstering them.”