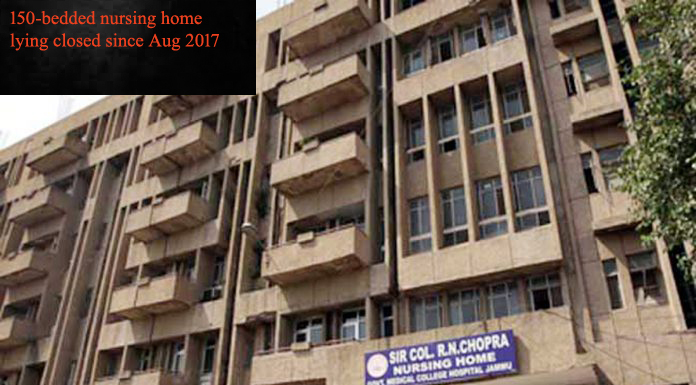 Jammu: In its fight against CoronaVirus, Jammu and Kashmir government with the support of the Centre, is adopting all measures to contain the pandemic and also raising additional infrastructure to meet emergency like situation but astonishingly why Chopra Nursing Home, one of the best facilities the government is having, is not being revamped even when surplus funds are being spent for the cause, is a million dollar question.

Four years on, the erstwhile lone government run Col ChopraNursing Home is shut and the facility could not be restarted, even in COVID pandemic to facilitate the patients, reasons better known to the concerned authorities.

“With cases surging day by day, the government hospitals and other nursing homes are catering rush of patients, which has forced the administration to convert buildings like Saraswati Dham, Yatri Niwas into Covid Care Centers but surprisingly, no steps were taken to make one of the largest government nursing homes adjoining Jammu GMC premises, Sir Col Chopra Nursing Home, functional,”sources in the Health Department said.

They said that the Nursing Home was closed four years ago when short circuit broke out in the building due to some technical fault, adding, “lakhs have been spent since then, Detailed Project Reports (DPRs) have been prepared on several occasions, but the building was not utilised on priority for the cause.” Sources added that in August 2017, due to some technical flaw in the building of the only Government’s Sir Colonel Chopra Nursing Home, the first two floors of the building were waterlogged and gripped by short-circuit.

“Initially, first two floors were closed but later on, it was completely shut for the patients,” they said and added that during COVID, there were hopes that this building shall also be utilised to treat the patients but surprisingly, the government did not paid attention to this one of the major facilities they are having.

“It can be a dedicated COVID hospital,” sources added and said that on one hand DRDO is engaged in constructing the COVID hospital at Bhagwati Nagar in days to come but how shocking that the Sir Col Chopra Nursing Home, remains a ‘deadwood’ facility for the administration.

“In 2020, there are reports that Rs 5 crores was also sanctioned for its furnishing but the funds lapsed and in the current financial year as well, Rs 5 crore have been sanctioned again but the repair work has not started yet,” sources asserted.

In 2017, a DPR of Rs 25 lakhs was prepared but the technical fault could not be rectified, they said adding, “the engineering wing earlier made a DPR of Rs 17 crore for complete overhauling of the building but nothing was done on ground and the proposal remains shelved.”

Constructed 32 years back, the Nursing Home was named after Jammu’s first scientist, Sir Colonel R N Chopra, who was also known as Father of Indian Pharmacology.

“Col Chopra Nursing Home was once the first choice for the patients, who could afford the treatment at government fixed rates. The Building also had a testing laboratory and the government used to earn Rs 5-6 lakhs per month out of it.

There was a provision of AC and non AC rooms for the patients, sources added.

The Building was inaugurated on December 21, 1989 by the then Chief Minister Dr Farooq Abdullah with an aim to provide surgeries and other lab tests at affordable rates to the people undergoing a private treatment.

A separate staff was appointed for the Nursing Home, which is now attached in the Government Medical College and Hospital.

They added that ‘The Kashmir Nursing Home’ in Srinagar is currently being used for the treatment of Covid patients, but Sir Col Chopra Nursing Home is lying defunct.”

“The government is spending surplus funds in COVID fight but it is amazing that they are not paying any attention to one of the major facilities we have available. By the time COVID crisis has knocked our doors, it is now more than one year, this infrastructure should have been readied and laced with equipment to meet any urgency,” a senior Doctor pleading anonymity suggested.