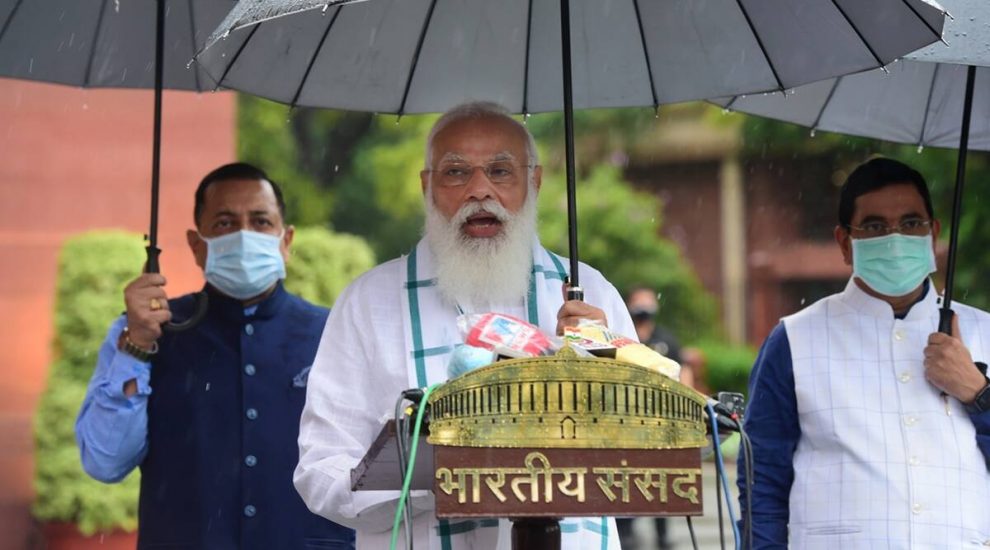 New Delhi: Prime Minister Narendra Modi on Tuesday said the Covid crisis is not a political but a humanitarian issue and asserted that the government has ensured no one goes hungry during the pandemic.

Such a pandemic has been witnessed by the world after a very very long time, Parliamentary Affairs Minister Pralhad Joshi quoted the prime minister as telling MPs at the BJP’s parliamentary party meeting.

The prime minister also said that it was ensured not a single poor person “sleeps” hungry, Joshi told reporters.

Modi stressed that despite the pandemic, a huge population got ration, and told BJP MPs that providing relief to the people was their responsibility and not a favour, according to Joshi.

He said the prime minister asserted that the pandemic is a humanitarian issue and not a political one.

The prime minister expressed concern about the attitude of the opposition, especially the Congress, and said it still believes, it has the right to be in power, Joshi quoted Modi has saying at the meeting.

He also told BJP MPs that the government was willing to hold discussions in both Houses of Parliament, but the opposition was showing a most irresponsible behaviour, Joshi said.

Sources said that in the meeting, Modi asked BJP MPs to be effectively counter the allegations of the opposition about the government’s Covid response and the availability of vaccines.

He also told the MPs that considering the anticipation of a third wave of the Covid pandemic, they should prepare and be ready to put boots on the ground, the sources said.

On the Covid vaccination drive, Modi emphasised that BJP MPs should ensure that the drive in their respective constituencies is carried out without glitches.

Taking on the opposition, the prime minister pointed out that in Delhi nearly 20 per cent of frontline workers are not till now vaccinated against Covid, they said.

The opposition has been attacking the government, alleging “mismanagement” in handling of the second wave of the pandemic. It has also demanded a statement in Parliament on the issue.