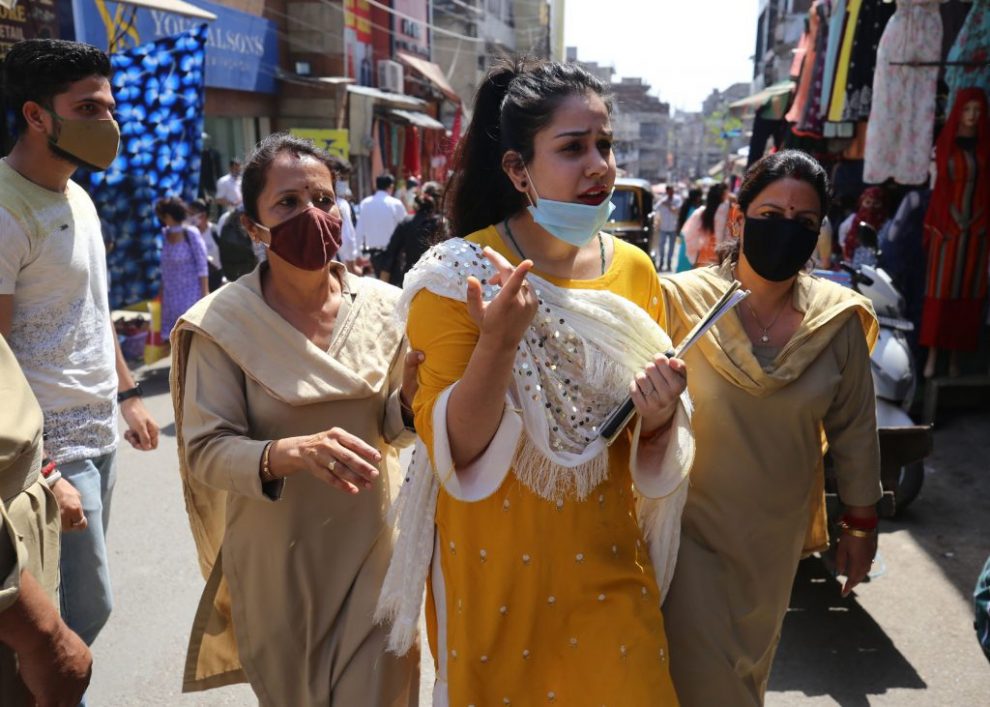 Jammu: The Jammu and Kashmir administration announced a 34-hour curfew from 8 pm on Saturday amid a surge in coronavirus cases in the Union Territory. Moreover, the government decided to provide free Covid jabs to all the eligible beneficiaries.
“Complete corona curfew to be observed in the Union Territory from 8 PM, 24th April (Saturday) till 6 AM, April 26 (Monday). Essential and emergency services to be allowed. All market, commercial institutions will remain closed,” the office of Lieutenant Governor (LG) Manoj Sinha said in a tweet.

On April 8, a night curfew from 10 pm to 6 am was imposed in the urban areas of eight districts, which was extended to the municipal and urban local body limits of all the 20 districts in the Union Territory on April 20.

Jammu and Kashmir”s tally of COVID-19 cases surged to 1,56,344 on Friday as 1,937 more people tested positive for the viral disease, while the death toll due to it climbed to 2,111 with a record daily jump of 19 fatalities, officials said.

Besides extending the night curfew on April 20, the administration had ordered the closure of 50 per cent shops on alternate basis in municipal and urban areas and capped the passenger capacity in public transport at 50 per cent.

While the shopkeepers followed the order with some reservations, the transporters in the Jammu region went on an indefinite strike on April 21, demanding a 50-per cent hike in the passenger fare to save them from operational losses.

The Jammu Chamber of Commerce and Industry (JCCI) appealed to the Union Territory administration to review its decision pertaining to the opening of 50 per cent shops on alternate days, claiming that the schedule formulated by the administration is causing much inconvenience to both the trading community as well as the people at large.

Demanding a review of the order, the trade body suggested that the shops and other establishments should be allowed to work daily from 10 am to 6 pm with a two-day weekend lockdown on Saturdays and Sundays.

In view of the marriage season having commenced, the JCCI said people, especially those who have weddings in their families, are highly perturbed over this schedule, which needs an immediate review.

Expressing similar views, the Federation of Traders” Associations said there are some markets in Jammu that deal in single-stuff products and keeping the entire market closed on particular days causes great inconvenience to people.

However, he said the association does not support the administration”s decision of opening 50 per cent shops on alternate days as the move is not in favour of the general public and the traders.

Meanwhile, the Jammu and Kashmir will provide COVID-19 vaccine free of cost to people in the 18-45 age group, the office of Lieutenant Governor Manoj Sinha said on Saturday.

“It has been decided that COVID-19 vaccination for people in the age group 18-45 years will be cost-free in the UT. The cost of vaccine will be fully borne by the government of J&K. The health department will constitute a panel to work out the logistics,” the L-G”s office said in a tweet.

The vaccination of people in the 18-45 age bracket will begin from May 1.

Meanwhile, Financial Commissioner of Health and Medical Education Atal Dulloo on Saturday chaired a meeting at the Civil Secretariat here to review the situation and the implementation of five-pronged strategy to tackle the surge in infections.

Dulloo impressed upon the officers for effective implementation of the five-pronged strategy — testing, containment, isolation and treatment, COVID-19-appropriate behaviour and vaccination — to contain the spread of the virus, an official spokesman said.

“We have to gear up all our efforts at all levels, only then we will be able to tackle the surge of cases. Testing has to be increased significantly at all designated facilities and bring down the test positivity rate in each district,” he said, addressing the meeting.

He said all the testing facilities have to make sure that the set targets are met on daily basis and installation of oxygen generation plants needs to be expedited which would augment oxygen supply to hospitals.

Calling for an increase in the pace of vaccination, Dulloo directed the officers to make all the necessary arrangements to accelerate the vaccination drive to the population.

“By vaccinating more people, we will be better equipped to fight the disease,” he said, adding that they have an adequate supply of vaccines in all districts.