Home Newsfeed COVID-19 will be under control by Diwali: Dr Harsh Vardhan 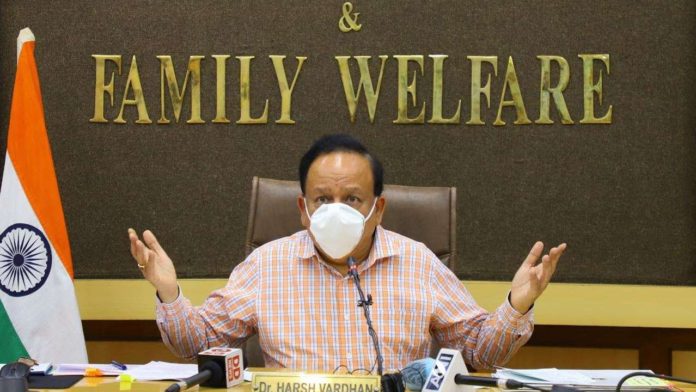 Union Health Minister Dr Harsh Vardhan expressed confidence that the country’s COVID-19 count will be “under control” by Diwali this year.Inaugurating the ‘Nation First’ webinar series, organised by the Anathkumar Foundation, he pointed out that the country was much ahead in tackling the pandemic.
“The COVID-19 will significantly come under control by the Deepavali this year. The leaders and common people effectively worked together to fight the pandemic. He inaugurated Nation first webinar series organised by Ananth Kumar Foundation,” the press release said.

He further said that the health officials had held a meeting much before the first COVID-19 case was reported in India.”Later on, Prime Minister Narendra Modi formed a committee led by me which has already met 22 times until yesterday,” he said.”There was only one laboratory in June by February, which has now been increased to 1,583 nationwide. Out of this, more than 1,000 are government labs. The country is conducting about 1 million tests per day which is way ahead of the target,” the health minister said.

He observed that compared to earlier there is no scarcity of PPE kits, ventilators, and N 95 masks now
“The scarcity of PPE kits, ventilators, and N 95 masks is no more now. Every day, five lakh PPE kits are produced in the country while 10 manufacturers are producing N95 masks. 25 producers are manufacturing ventilators,” he added.He said that vaccine trials are in full swing, with three clinical trials and four pre-clinical trials underway.
“We are expecting vaccines to be ready by the end of the year. It is because of the farsightedness of Prime Minister Narendra Modi that we could reach until here,” he added.

Newsfeed The Dispatch Staff - September 22, 2020
Union Minister Prakash Javadekar said India is home to the largest number of Greater One-Horned Rhinoceros in the world with population in...

Newsfeed The Dispatch Staff - September 22, 2020
The country has achieved a record high of over one lakh recoveries  from  COVID-19 in the last 24 hours. The recovery rate ...