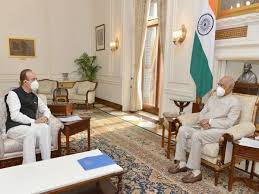 Nearly 33 lakh 24 thousand people in the country have recovered from the viral pandemic. In the last 24 hours, India witnessed one of the highest single day COVID-19 recoveries of over 73 thousand 500 patients.

The overall recovery rate has also maintained its upward trend and has now reached at 77.65 per cent.

The Health Ministry has said, the constant increase in recoveries have ensured that the actual caseload has reduced and currently comprises only 20.65 per cent of the total positive cases. The number of recovered patients has overtaken the active cases by nearly 3.8 times.

The Ministry said, the number of recovered patients in the country has grown over three times in a span of one month.

The Health Ministryalso said that the sustained high recovery rate is fuelled by 9 states and union territories reporting a recovery rate of over 80 per cent. These states include Bihar, Tamil Nadu, Delhi, West Bengal, Rajasthan and Gujarat among others.

The ministry has informed that aggressive measures towards early identification, prompt and effective treatment and enhanced clinical skills of ICU doctors have actively led to progressive enhancement of  India’s total recoveries. It said high levels of recovery is being reported from various States and UTs and almost 60 per cent of the total recovered cases are pooled in by the 5 States of Maharashtra , Andhra Pradesh , Karnataka , Uttar Pradesh and Tamil Nadu.

Effective implementation of ‘Test, Track and Treat’ approach has led to higher recoveries and lower fatality. Currently, India’s Case Fatality Rate is at 1.70 per cent.

Presently, the total number of active corona cases in the country is 8 lakh 83 thousand and 697. In the last 24 hours,  one thousand 133 deaths have  been reported taking the toll to 72 thousand 775.

India has achieved the milestone of testing over five crore COVID samples. With nearly 11 lakh tests done in last 24 hours by around one thousand 668 labs across the country, so far five crore six lakh 50 thousand 128 tests have been successfully conducted.

The country has witnessed significant stepping up in it’s COVID testing capacity in the last five months and currently stands among the league of nations conducting highest daily testings across the world. From just 160 labs testing COVID samples on 23rd of March this year, the country today has one thousand 35 government labs and 633 are private labs. Despite increase in testing the positivity rate remains less than 8.5 per cent.

Rajasthan, Uttar Pradesh, Punjab and Madhya Pradesh have recorded a positivity rate even lower than five per cent.  The Health Ministry said that high levels of testing sustained over a period of time in widespread areas has enabled early diagnosis of cases and facilitated seamless isolation and hospitalization. It said, this has also led to low mortality rate.