Home Jammu & Kashmir COVID 19; Life remains crippled due to lock down in Kashmir 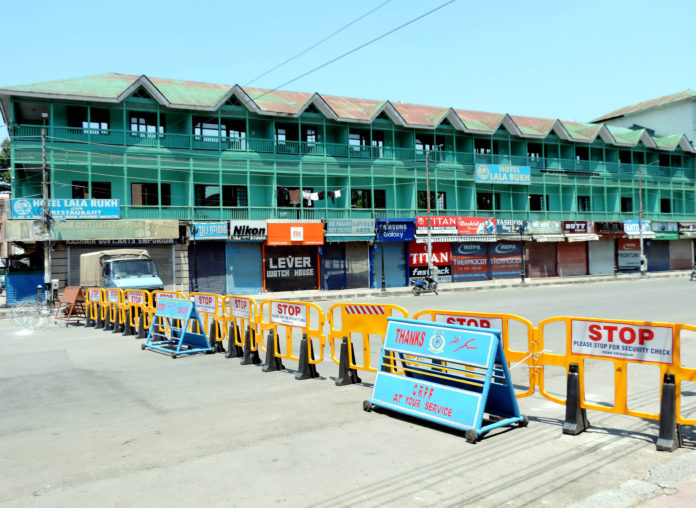 Srinagar: Life remained affected on Saturday due to lock down imposed by the authorities in view of continued spike in COVID-19 cases in the Kashmir valley, where 455 people have lost their lives and about 24000 tested positive.

Due to fresh increase in coronavirus positive cases, several district administrations have ordered fresh lock down and other measures to prevent further spread of the virus.

Shops and business establishments remained closed and traffic was off the roads in summer capital, Srinagar. However, private vehicles besides three wheelers were seen plying in the city routes. Defying lock down some passenger vehicles were also plying on some routes, mainly in the uptown and highway bypass.

All major business hubs, including Lal Chowk, the nerve centre of the city continued to wore a deserted look with only security forces and some pedestrian seen moving. Goni Khan and Mahraj Bazar markets remained closed with barbed wire from both sides though only pedestrians were allowed to move.

The Amira Kadal bridge, the main link between HSHS and Lal Chowk also remained closed with barbed wire. However, one of two foot paths on the bridge was open for pedestrians.

There was also no change in the situation in Maisuma, the stronghold of JKLF and adjoining areas. However, private vehicles , particularly two wheelers were seen plying on Budshah Bridge on Moulana Azad road though security forces and police personnel remained deployed.

There was no major change in the situation in the down town and Shehar-e-Khas (SeK), where shops and business establishments remained closed and passenger traffic remained off the roads.  Though security forces have lifted majority nakas and other barricades, in several areas, including Nallahmar road, only one side of the road was open and private transport was allowed to ply.

In the outskirts of the city some small shops were open and private traffic plying.

Life remained affected other main towns and tehsil headquarters in the Kashmir valley, where lock down was imposed from August Ist to contain further spike in COVID 19 positive cases.