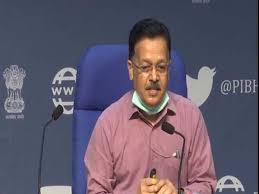 Union Health Secretary Rajesh Bhushan reviewed the status of response measures to COVID-19 in West Bengal, Delhi and Kerala and advised the states and Union Territories (UTs) to gear up testing, tracking and treatment strategy during the festive season.

Bhushan has advised these states and UTs to ensure enforcement of precautionary measures like maintaining social distancing, sanitisation, wearing of masks, etc.

“There has been nearly 46 per cent increase in the new COVID cases over the past four weeks. The positivity rate over the last four weeks has escalated by nearly 9 per cent. The rising cases were attributed by the Delhi team to social gatherings during the festivities, the deteriorating air quality, increasing incidences of respiratory disorders, and clusters of positive cases at work places. The fatigue among frontline workers was also discussed,” said the Health Ministry in a statement.

Similarly, West Bengal has 37,111 active cases as on Thursday. The case fatality rate of the state stands at 1.84 per cent and the positivity rate is 8.3 per cent. The State has registered 3,924 new cases in the last 24 hours, while the average daily cases have recorded 23 per cent increase over last four weeks.

“There is a 1 per cent increase in the positivity rate over the last four weeks. Darjeeling, Nadia, Medinipur West, Jalpaiguri, Hooghly are the top districts showing an increasing trend in cases. Whereas, Murshidabad, Nadia, Coochbehar, Kolkata and Darjeeling have registered increase in the weekly deaths last week. The tests per million population (TPM) stand at 41,261 whereas the national TPM is 77,220,” informed the Health Ministry.

The Centre has advised West Bengal health authorities were advised not to compromise on testing and keep the level of daily tests at a higher level with greater proportion of RT-PCR tests.